Asia-Pacific markets look ready for a higher open as risk-sensitive assets like Bitcoin and the Australian Dollar gain versus the haven-linked US Dollar despite a late-day selloff on Wall Street overnight. BTC/USD traded to its highest level since January 5, while AUD/USD rose by more than half a percentage point. The tech-heavy Nasdaq 100 Index (NDX) led losses in New York, with Meta stock continuing its decline from last week when a poor earnings report put off investors.

Traders will look to extend the move higher in Chinese equity markets after a rosy start coming off a week-long holiday break. The tech-heavy CSI 300 index gained 1.54% on Monday. China’s Caixin purchasing managers’ index (PMI) for January, released Monday, showed slower growth from the prior month, coming in at 51.4 from 53.1 in December. Waning demand amid the Omicron wave and higher material costs weighed on the sector.

This morning, Japan reported a 0.2% year-over-year drop in household spending for December. That was below the +0.0% consensus analysts’ forecast, according to a Bloomberg survey. Japan’s January bank lending dropped at 0.6% y/y, constant from +0.6% in December. Later today, Japan’s Eco Watchers Survey for January will cross the wires. January business confidence numbers are due out at 00:30 GMT from Australia. Today’s economic calendar is rather light elsewhere.

Crude oil prices fell overnight while Brent managed to stay afloat, with both benchmarks hovering near multi-year highs as demand ramps up amid tight market supply. Other commodities, including industrial metals and agricultural products, have surged in recent weeks, driven largely by the same fundamental factors pushing energy prices higher, along with shrinking physical inventories. Jeff Currie, head of commodities research at Goldman Sachs, stated overnight on Bloomberg, “This is a molecule Crisis. We’re out of everything, I don’t care if it’s oil, gas, coal, copper, aluminum, you name it, we’re out of it.”

Bitcoin broke higher overnight, adding to upside stemming from the late-January multi-month swing low, and bringing prices above the 50-day Simple Moving Average (SMA). The 61.8% and 78.6% Fibonacci retracements may offer some resistance, with a break above those levels exposing the 200-day SMA. Alternatively, a move back to the downside would see bulls likely attempt to defend the psychological 40,000 level. MACD is aiming for a break above its center line, a bullish sign, while the RSI oscillator is also aimed firmly higher. 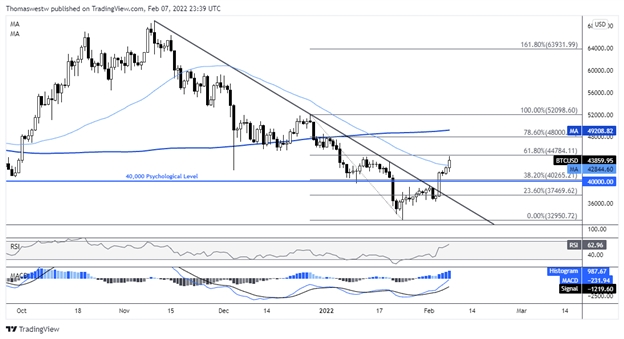