The Australian Dollar fell versus the US Dollar overnight as traders remained cautious ahead of several potentially high-impact events that are approaching. AUD/USD weakened along with equity markets on Wall Street, with the benchmark S&P 500 index closing 0.14% in the red. That followed a mixed performance across Asian stock markets on Monday.

A seemingly more aggressive Federal Reserve is the primary headwind for risk assets. Many traders now view a March rate hike from the Fed as the most likely scenario, prompted by sustained inflation across not just the United States but many key global economies. China will report inflation data later this week, with price growth expected to moderate to 1.8% from 2.3% for December, according to a Bloomberg survey. China’s factory-gate prices are also seen easing via the producer price index (PPI).

Australia’s November balance of trade is set to cross the wires at 00:30 GMT, which may cause some movement in the Australian Dollar. Analysts expect Australia to post a A$10.6 billion surplus, down slightly from October’s A$11.22 billion surplus. A better-than-expected figure would likely brighten the outlook for the Asia-Pacific region’s economy, which would also likely bode well for the Aussie Dollar. Australian retail sales are also set to drop with the trade balance data, with the consensus estimate standing at 3.9% for November, down from October when the figure surged 4.9% after Covid restrictions were rolled back.

Later today, the Philippines will also report trade data for November and its retail price index (Oct). Japan’s November coincident index and leading economic index will drop. Meanwhile, Covid cases have surged in Australia, adding more than 67,000 to the count on Monday after a 100,000 increase on Sunday. Australia is now avoiding lockdowns, with the vast majority of its adult population being vaccinated.

AUD/USD is slightly higher in early APAC trading, but an area of conflict from the September swing low appears to be serving as resistance. A break higher would see prices test the falling 50-day Simple Moving Average (SMA). A reversal lower could find support at the 23.6% Fibonacci retracement from the October/December move. An extended selloff would threaten the November 2020 low. Overall, however, the path lower looks to be the most likely given its technical position and a weakening MACD oscillator. 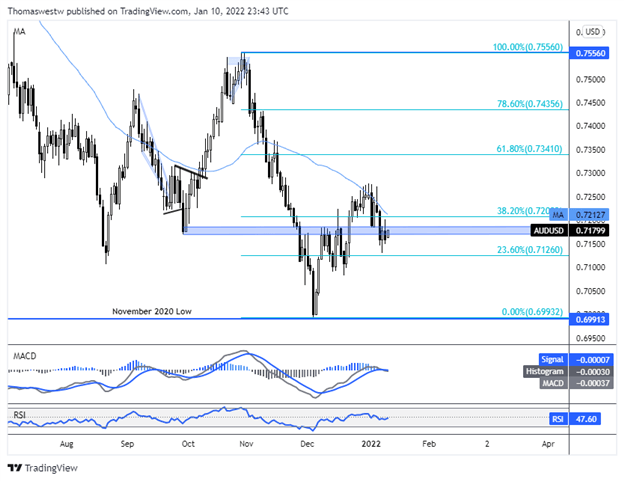