AUD/USD Gains Beside Dow Jones Ahead of RBA Chart Pack

Asia-Pacific markets look set for a mixed open after Wall Street traders shifted out of high-beta technology stocks and into the cyclically-sensitive energy and finance sectors. Equity markets across Asia have gotten off to a mostly slow start this week, although Japan’s Nikkei 225 index has outperformed, which is likely due to a broadly weaker Yen. Risk-sensitive currencies like the Australian Dollar fared much better overnight.

Meanwhile, the US Dollar was largely unchanged via the DXY index overnight despite a surge in Treasury yields. The 5-year note’s rate hit the highest level since February 2020. However, the 1- and 2- year rates fell. The Greenback is more sensitive to those shorter-term yields, which explains some relative weakness. Yields rise when bond prices fall.

Elsewhere, oil prices gained after OPEC and its allies, known as OPEC+, announced they will increase production as a group by 400,000 additional barrels a day in February. The cartel cited robust demand prospects despite the recent surge in Covid-19 cases across the world. While the new Omicron variant has caused some travel restrictions, health policy experts believe the strain is less deadly than those before it, leading to the belief that it could perhaps bring an accelerated end to the pandemic.

Speaking of PMI data, China’s Caixin released its PMI reading for December manufacturing at 50.9, up from the prior 49.9 figure. That beat analysts’ expectations of 50.0, according to a Bloomberg survey. The data confirms the NSB manufacturing PMI numbers from last week, although the Caixin figure better reflects smaller firms compared to larger firms in the NBS data.

While AUD/USD made strong overnight gains, the daily candlestick is struggling to eclipse the prior day’s open, as well as the falling 50-day Simple Moving Average (SMA). A break above those levels would almost immediately put prices up against the 100-day SMA. Alternatively, a break low would have prices move toward the December low at 0.6993. 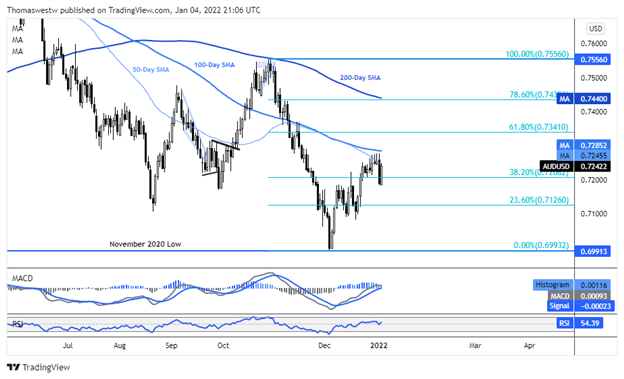