Asia-Pacific markets are likely to extend a risk-off bout seen on Wall Street overnight as market participants brace themselves amid more Omicron fallout. The extremely contagious variant now accounts for nearly 3 out of every 4 cases in the United States, according to the Centers for Disease Control and Prevention (CDC). The Dow Jones Industrial Average (DJIA) sank 1.23% in New York while risk-sensitive currencies like the Australian Dollar fell versus the Greenback.

Oil prices were lower into APAC trading as the prospect of more travel restrictions weighed on the demand-sensitive commodity. Israel moved to ban travel to the United States, citing the increased spread of the Omicron variant. Expectations are rising that we will also see additional travel curbs coming out of Europe over the next week.

The Reserve Bank of Australia (RBA) will release minutes for its latest meeting at 00:30 GMT. Traders will parse the statement for any clues on when the central bank intends to start hiking interest rates. RBA Chief Philip Lowe has worked to temper market expectations, which have called for a rate hike as soon as next year, over the last several months. Still, the minutes likely won’t move the Australian Dollar too much given the fresh uncertainty hanging over markets.

Later today, credit card spending (Nov) for New Zealand will cross the wires. Analysts expect the year-over-year figure to cross the wires at -2.1%, up from October’s -5.6% figure. New Zealand’s Global Dairy Trade Price Index is due out later in the day, as well as the December ANZ Roy Morgan consumer confidence report. Hong Kong will release inflation data for November.

AUD/USD fell to a level of support from the August low near 0.7106 overnight. A clean break lower could open the door for bears to push prices down to the November 2020 swing low at 0.6991. Alternatively, a reversal higher would take aim at the falling 26-day Exponential moving Average (EMA) and a recent area of resistance near the September swing low. 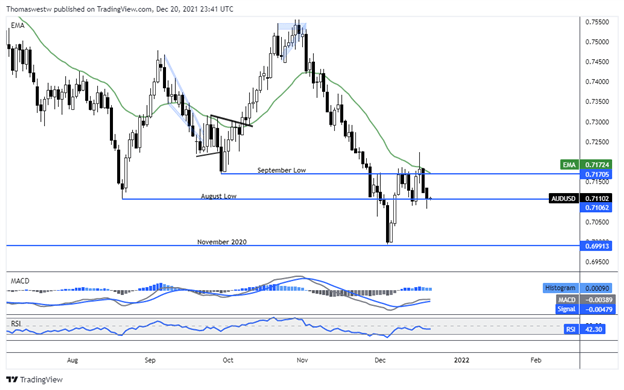