The risk-sensitive Australian Dollar fell overnight after the Omicron variant was revealed to have made landfall in the United States. The news threw markets back into a risk-off stance, with stocks dropping on Wall Street and the safe-haven US Dollar gaining. Investors are on edge, given that scientists are still assessing the threat the new strain poses.

This uncertainty in the markets is likely to continue until more light is shed on the new Covid variant. A wave of travel restrictions has been put in place by dozens of countries, a move that will certainly damage the South African economy. A broader concern over lockdowns is, however, the driving force behind the current volatility. It is particularly damaging to sentiment, given that the end of the pandemic was viewed as being just around the corner.

Elsewhere, the Turkish Lira fell to a new low versus the US Dollar before trimming losses after Turkey’s central bank announced it would be taking action against unhealthy movements in the foreign exchange rate. Cities across Turkey have seen protests this week over the economic conditions brought on by President Erdogan’s highly unconventional economic policy.

Australia will see its October trade balance cross the wires at 00:30 GMT. Analysts expect the country’s trade surplus to fall to A$11 billion from A$12.24 billion in September. An upbeat print may help stem the outflows from the Aussie Dollar, which has come under serious pressure in recent weeks. That weakness comes despite a rosy GDP print from earlier in the week. For now, it appears broader sentiment remains the main AUD driver.

AUD/USD continues to cling to the August swing low, but it appears bears are starting to gain an upper hand. The currency pair is coming off a horrible November when prices sank over 5%. If prices continue to trend lower, the psychological 0.7000 level may offer the next major point of resistance. The Relative Strength Index is in oversold territory, which highlights the extreme weakness, although that doesn’t mean prices can’t keep falling. 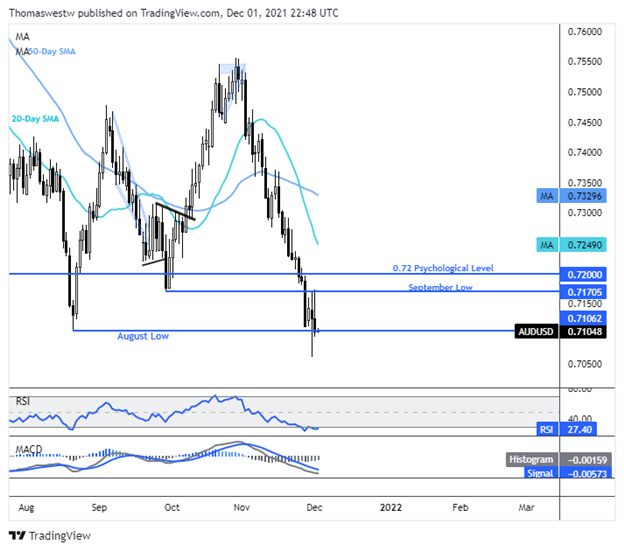