The Australian Dollar is in focus for today’s Asia-Pacific trading session, with Australia set to report trade data for September. Analysts expect the figure to cross the wires at A$12.2 billion at 00:30 GMT. That would be down from the A$15.07 billion in August when an energy crunch caused by surging natural gas prices in Europe and Asia helped drive coal exports. Those prices remained elevated in September, which leaves the data print open to a possible outsized beat or miss.

Traders ditched the US Dollar overnight despite the Federal Reserve announcing balance sheet growth tapering. The Fed said it would begin to roll back asset purchases later this month at the monthly pace of $15 billion, which consists of $10 billion in Treasuries and $5 billion in mortgage-backed securities (MBS). The US Dollar DXY index moved lower despite a modest move higher in 2- and 5-year Treasury yields.

Today will bring foreign bond investment data out of Japan for the week ending October 30. Final Japanese PMI readings for October will cross the wires later in the day. However, APAC traders will work on digesting the Federal Reserve decision. However, a modest risk-on move appears to be kicking off today’s session, which is likely to continue outside of any unseen event risks.

Elsewhere, oil prices are on the move lower after an overnight drop. Crude and Brent oil benchmarks accelerated to the downside after US government data showed a larger-than-expected inventory build. The weekly Energy Information Administration (EIA) report for the week ending October 29 showed a 3.29 million barrel build. That was well above the 2.22 million barrel increase analysts expected.

AUD/USD pivoted higher overnight after prices tested the 38.2% Fibonacci retracement level from the September/October move. Prices are currently grappling with the rising 20-day Simple Moving Average (SMA), with the 23.6% Fibonacci directly overhead. MACD weakness is moderating alongside a rising RSI reading, which suggests upside momentum may be strengthening. A break above the 20-day SMA and 23.6% Fib may open the door for a test of the October swing high at 0.7556. 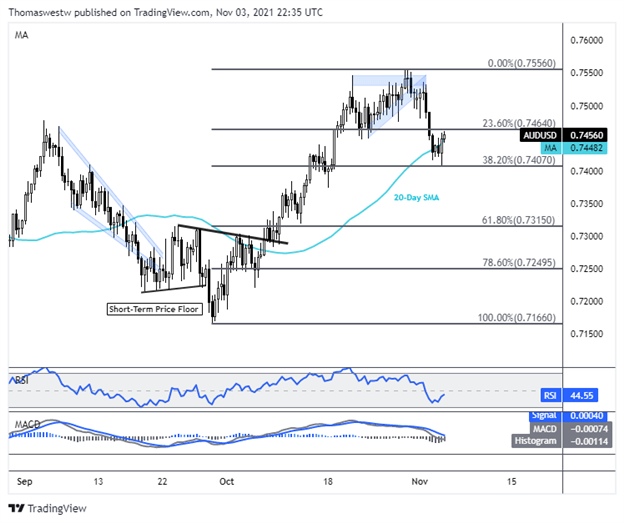