The New Zealand Dollar is moving higher to start the week after inflation beat analysts’ expectations. The third-quarter consumer price index (CPI) crossed the wires at 4.9% on a year-over-year basis versus a median expectation of 4.1%, according to a Bloomberg survey. NZD/USD caught a bid on the report, which puts the currency pair on track to extend gains from last week.

NZD-derived overnight index swaps increased last week, with the one-year OIS rising to its highest level since January 2020, which reflects a rise in rate hike bets. The island nation also saw its Performance of Services Index (PSI) increase for September, according to data from BusinessNZ. PSI increased to 46.9 from 35.6, marking a significant uptick in services activity. That follows an upbeat September business PMI print from last week.

Traders will shift focus to Chinese data due out later today. China’s third-quarter GDP growth rate will provide the most likely potential for event risks. Data on fixed asset investment, industrial production, retail sales, and unemployment will also cross the wires. Analysts expect to see Q3 GDP come across at 5.2% y/y, and a 3.3% y/y figure for September retail sales. The data prints may set the tone for trading through the remainder of the week.

The Australian Dollar is a prime candidate to see some volatility around the Chinese data dump. AUD/USD traded higher last week as a closely watched yield spread to gauge economic health dropped, which weighed on the US Dollar. That also helped gold and other metals, including aluminum and copper, to rise. The strong performance in metals coincidentally boosted the Aussie Dollar, as well as a pullback in Covid restrictions.

NZD/USD is testing a late-September swing high at 0.7093 after gaining into the APAC session. Prices have been on the up since breaking higher from a Symmetrical Triangle pattern last week. If prices fail to pierce 0.7093, a drop back to the recently breached 50-day Simple Moving Average is on the cards. The Relative Strength Index is currently in overbought territory at 76.90, indicating prices may be overextended on a technical basis. 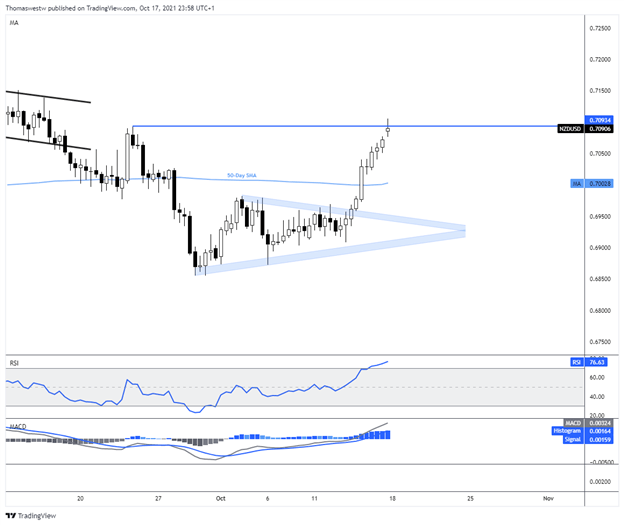