Asia-Pacific markets are set to move higher on the open after an upbeat Wall Street session saw stocks move higher overnight. The benchmark S&P 500 index gained over half a percent on the close, its best performance in months. A series of better-than-expected earnings from US companies appear to be bolstering market sentiment. The risk-sensitive New Zealand Dollar lead gains versus the dollar in the APAC region.

Oil prices are moving higher as the global energy crunch – driven by surging natural gas and coal prices – sends ripples through energy markets. The International Energy Agency (IEA) said Thursday that shortages in natural gas and coal are boosting demand for oil products. Europe and Asia are driving the bulk of that demand it appears.

The Energy Information Administration reported a drop in Cushing Oklahoma crude oil stockpiles overnight. The drawdown is likely being caused by high demand for exports of sweet crude oil, which is easier to refine for power plant usage than heavier oil products such as Brent. Power plants are switching to oil as a power source due to the astronomically high prices of natural gas. 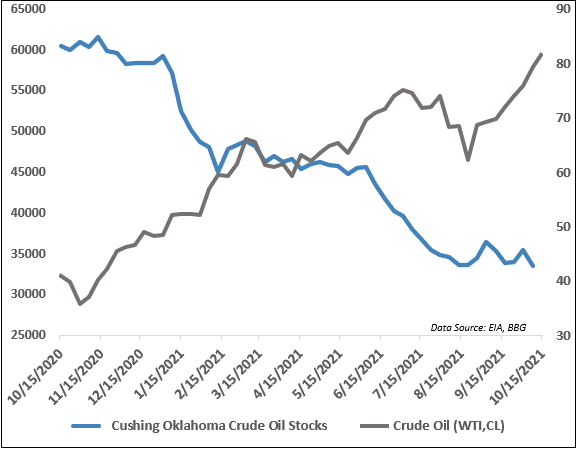 The safe-haven US Dollar softened further overnight, extending its drop from a recently made 2021 high for the second day now via the DXY index. That is allowing commodities largely priced in USDs to catch a bid such as copper and silver. Gold also moved higher overnight as Treasury yields pulled back. The benchmark 10-year note’s yield dropped for a third day.

New Zealand saw PMI data cross the wires from BusinessNZ. The BNZ manufacturing index rose to 51.4 from 40.1 for September. The sharp bounce back in business activity reflects a series of Covid restrictions being rolled back, primarily those in Auckland. NZD/USD traded at its highest level since September 24 after the Kiwi Dollar’s overnight gain. Traders will be on the lookout for China to release foreign direct investment (FDI) data for September over the next few days.

The New Zealand Dollar’s outperformance versus the US Dollar relative to regional peer currencies such as the Aussie Dollar reflect aggressive rate hike bets. The market is pricing in a much more aggressive rate hike path for the Reserve Bank of New Zealand (RBNZ). Those bets can be viewed through overnight index swaps (OIS). The chart below shows the aggressive pricing from swap traders, with the one-year OIS at its highest level since early 2020. 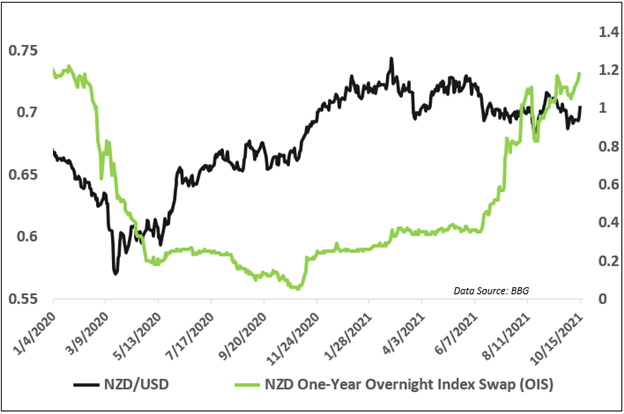 NZD/USD broke above its 50-day Simple Moving Average (SMA) overnight. Bulls started to drive prices higher Thursday when prices broke above the resistance level of a Symmetrical Triangle pattern. Prices are now testing September levels, with the psychologically imposing 0.71 handle nearing. A pullback may see the 50-day SMA step in to provide support. RSI is nearing overbought territory at the 70 level, while MACD continues higher. 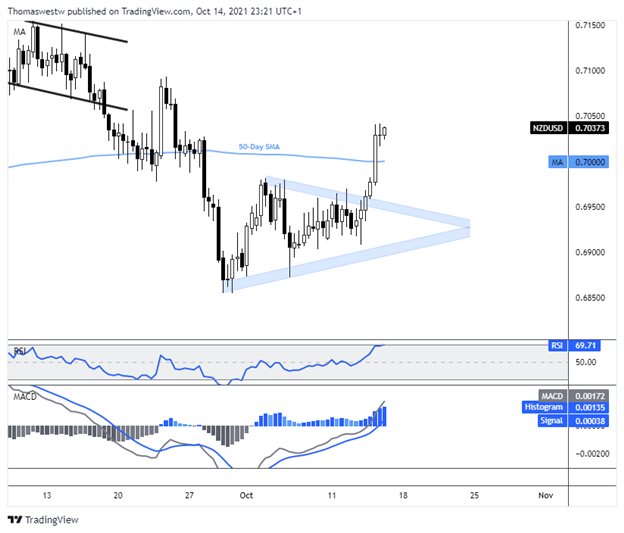