The Australian Dollar rose overnight alongside US stocks after several risk drivers subsided through the New York trading session. Politicians on Capitol Hill reportedly reached a deal to raise the US debt ceiling to provide funding through December. Thursday’s fall in natural gas prices eased some energy concerns. When it comes to market sentiment, these ebbing fears bode well for risk assets moving into Friday’s US non-farm payrolls.

Traders are laser-focused on tomorrow’s US jobs data, which will reveal whether last month’s disappointing report was a one-off event or a simple exception in the labor market’s recovery. Analysts expect to see 500k jobs added in September, according to a Bloomberg survey. That would be more than double the August figure. Initial jobless claims fell for the first time in four weeks for the week ending October 1, according to the US Department of Labor. That was an encouraging signal heading into the September NFP print. A better-than-expected figure is likely to encourage some risk taking.

Today will offer more immediate economic data, with China’s Caixin set to report September PMI data for the services sector. A survey of economists from Bloomberg shows a consensus median forecast of 49.2, which would be a slight uptick from 46.7 in August. A rosy print may remove some concerns over an economic growth slowdown in China. Government data from Thursday revealed a fall in China’s foreign exchange reserves. A stronger US Dollar likely contributed to the drop off.

Russian President Vladimir Putin eased concerns over rising natural gas prices – which have added to broader inflationary fears – on Wednesday. Mr. Putin said Russia would potentially increase supply to the European markets. Natural gas prices are up nearly ten times from the start of the year. Meanwhile, the Nord Stream 2 pipeline continues to wait on regulatory approvals on the EU side, but the current energy situation in Europe may force flows to start earlier than expected. Interim approvals may potentially allow that.

AUD/USD broke above the 50-day Simple Moving Average (SMA) and a short-term level of resistance from Mid-September. Those levels may provide support if prices turn lower today. The MACD and RSI oscillators are oriented to the upside, suggesting healthy momentum for prices to continue gaining. 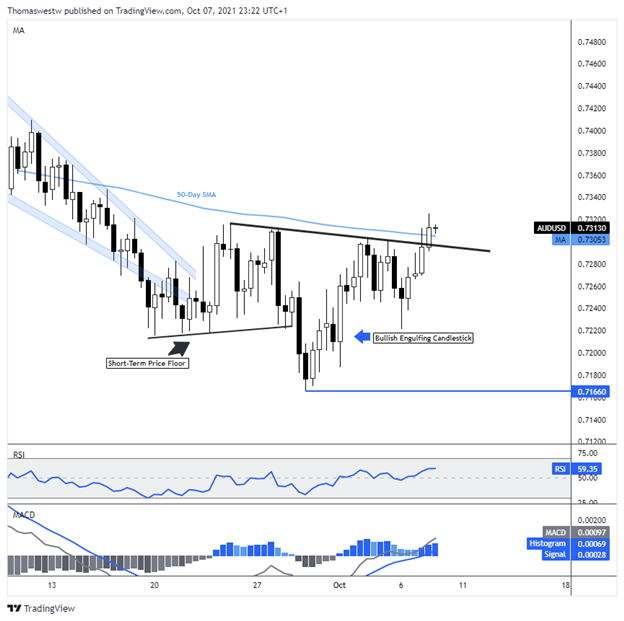