The ongoing Evergrande situation in China continues to weigh on market sentiment, with contagion risks fears in the spotlight. S&P 500 Global Ratings helped cement those fears on Tuesday when the credit agency said a default by the Chinese real estate titan is likely. S&P said that Beijing is also unlikely to step in unless serious and tangible systemic risks manifest in the economy.

That said, today will see mainland Chinese equity and bond markets come back online after an extended weekend holiday closure. Traders will be watching the open closely to see how the event is priced into domestic markets. Action by the People’s Bank of China (PBOC) is also under the microscope. The PBOC added 100 billion Yuan in cash to the banking system on Friday, the most since February.

Another large injection may help calm credit markets in China, but it could also signal worry from Chinese authorities. The one-year and five-year loan prime rates – used by commercial banks to price loans – are on the radar today as well. Analysts aren’t expecting a cut to either benchmarks, although it’s certainly not off the table given the current market conditions. Those rates were last cut in April 2020.

Tomorrow’s Federal Reserve interest rate decision is also a major looming risk event. Fed Chair Jerome Powell and his colleagues are undoubtedly following the situation in China closely. The potential for contagion risks may force the board (FOMC) to take a more dovish tone than they otherwise would have. The language used over tapering balance sheet purchases will likely attract the most attention, along with commentary on Evergrande.

The economic calendar shows several other potentially market-moving events. Australia will see the August Westpac leading index cross the wires, and RBA Bullock will speak. The Bank of Japan will release its September rate decision, with analysts expecting no change to the current -0.10% rate. The Yen is benefitting from risk aversion in the markets, with its haven appeal attracting inflows.

AUD/USD broke lower overnight after failing to retake former Wedge support. Moreover, prices are now cleanly below a descending trendline from July, along with the 61.8% Fibonacci retracement from the August/September move. Still, the pair has yet to breach a series of intraday lows from the past week. MACD weakness is moderating too, which suggests that the current move lower may be overdone. 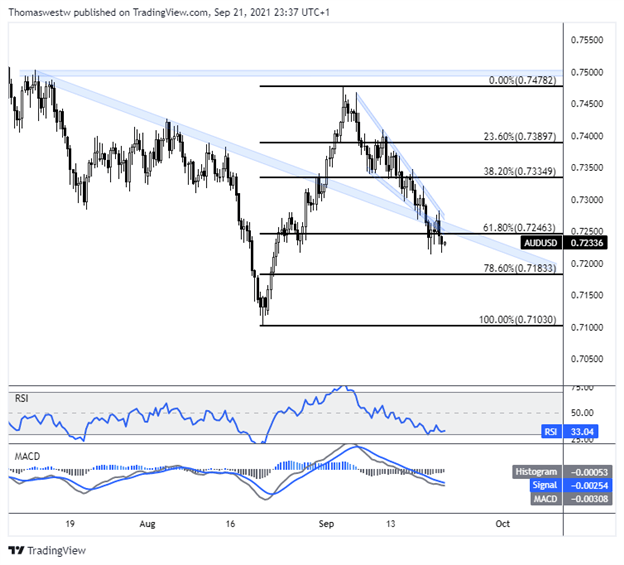