The risk-sensitive New Zealand Dollar is nearly unchanged against the US Dollar at the start of APAC trading. NZD/USD remains over 0.5% lower this week after a wave of risk aversion roiled markets. Fresh weakness in the US Dollar is likely the main force helping to keep the currency pair afloat, with the DXY index down 0.20% in early APAC trade. A small gain in AUD/JPY suggests some risk taking has returned. However, the Dow Jones Industrial Average did drop in New York Trading.

On Thursday, European Central Bank (ECB) Chief Christine Lagarde assured markets that easy monetary policy is here to stay for now. Still, the ECB moved to scale back its asset purchases program. PEPP purchases are to slow from the current pace of $95 billion per month to a “moderately lower pace.” The central bank’s updated projections show inflation will remain under target in the long run despite the Euro Area’s multi-year record-breaking surge in prices.

Crude and Brent oil benchmarks saw volatile trading overnight. China released oil from its strategic reserves. The move is an interesting intervention given the appearance that China’s goal seems to be aimed at capping rising price levels. Rising prices have put Chinese factories under pressure, including oil refiners. Thursday’s CPI and PPI numbers showed a 9.5% rise in factory gate prices in August.

This morning saw electronic retail card spending and visitor arrivals data out of New Zealand cross the wires. Electronic retail card spending for August came in at -19.8% on a month-over-month basis, missing the 1.7% consensus forecast. Visitor arrivals for July fell to 767.8% from 1365.2% the prior month. The date prints reflect a slowdown in growth as Covid cases rose throughout the late summer months, which caused a lockdown in Auckland and severely reduced Trans-Tasman travel. The downbeat data prints may pressure the Kiwi Dollar as the trading week nears a close.

NZD/USD is nearly unchanged after two days of small gains. Those gains follow a stronger selloff from earlier in the week. The 23.6% Fibonacci retracement appeared to underpin prices to stem those early-week losses. The 200-day Simple Moving Average is in focus, with prices trading directly below the high-profile moving average. Bears may attempt to push prices lower if the pair fails to retake the SMA. 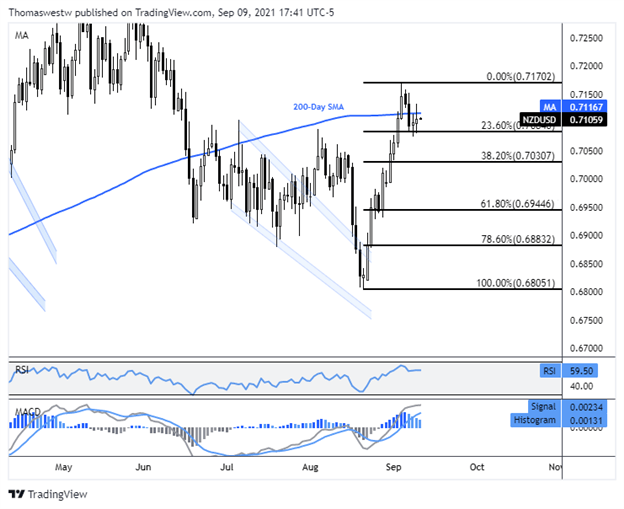