The Australian Dollar was tracking higher overnight in the aftermath of this week’s Reserve Bank of Australia (RBA) rate decision that disappointed dovish bets. Economists expected the RBA to reverse its plan to begin tapering the balance sheet in September. Instead, Governor Philip Lowe held steady on the plan to trim weekly asset purchases to A$4 billion per week from A$ 5 billion. That helped lift AUD/USD, given that the central bank caught investors off guard. It should be noted that the RBA sees some conditions where a rate hike may not occur until at least 2024.

However, comments from the Federal Reserve Vice Chairman Richard Clarida sent the US Dollar higher versus most of its peer currencies, including the Aussie Dollar. The Vice Chair solidified expectations for a rate hike in early 2023 after saying economic conditions for one will likely be met by late 2022. Wall Street fell on Clarida’s comments, with the Dow Jones Industrial Average closing 0.92% lower.

Elsewhere, the Central Bank of Brazil hiked its benchmark interest rate by 100 basis points, from 4.25% to 5.25%, as expected. Brazil is facing a surge in prices throughout its economy, which was the primary driver for the lift on rates. The central bank is forecasting more tightening at its next meeting to tame inflation that is well above its target.

Today’s economic docket for the Asia Pacific session will see prints from the Philippines, Indonesia, and Australia. The Philippines will report July inflation figures, with analysts expecting a 3.9% rise, down from 4.1% in June. Indonesia’s second-quarter GDP growth rate is also slated to cross the wires at 2.94% on a q/q basis, according to analysts.

Australia’s balance of trade figure is likely to be the most significant risk driver today. Economists are anticipating to see cross-border trade totaling A$10.45 billion in June, according to a Bloomberg survey. That would be slightly higher than May’s outcome. High iron ore prices throughout July likely underpinned strong cross-border transaction values. The metallic mineral commodity is Australia’s largest export. A better-than-expected figure today may bode well for AUD/USD. Watch the DailyFX Economic Calen dar to stay updated on today’s market events.

The Australian Dollar remains lower from the overnight fall. AUD/USD failed to maintain gains above the falling 20-day Simple Moving Average (SMA) despite briefly breaking above the September 2020 swing high, which has served as both support and resistance in recent months. MACD is tracking higher but upside price momentum has failed to get off the ground. 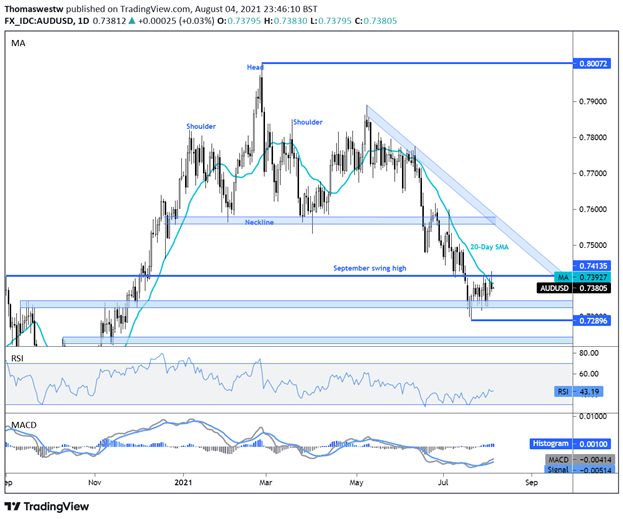