The New Zealand Dollar is in focus as Asia-Pacific trading begins. Traders appear optimistic, with risk assets gently shifting higher. New Zealand’s June trade balance surplus crossed the wires at NZ$261 million, down from NZ$469 million in the prior month. However, the decrease was driven by an outsized rise in imports versus exports, indicating a pickup in cross-border trade. That could indicate an overall strengthening in trade activity for the Asia-Pacific region. The Kiwi Dollar is slightly higher versus its US counterpart this morning.

Elsewhere, Japan will see July PMI data on the manufacturing and services sectors cross the wires later today. The 2021 Tokyo Olympic Games kicked off over the weekend. The international sporting event is being conducted under tight social-distancing rules due to the latest wave of Covid-19. Nearly 1,800 cases were reported on Sunday in Tokyo, up from close to 1,000 just a week ago.

Australia is facing its own wave of infections, with lockdowns enacted across South Australia, Victoria, and New South Wales. Victoria’s lockdown appears set to end this week, but Sydney in neighboring NSW will likely see at least several more weeks of heightened restrictions. The breadth and length of social-distancing measures have weighed on the Aussie Dollar as the forecasted economic hit sparks a rethink of the potential for RBA tightening. Australia will see its second-quarter inflation print cross the wires on Wednesday. Analysts expect a 3.8% rise in the Q2 CPI reading, well above 1.1% in the first quarter.

The Asia Pacific region will also see New Zealand business and consumer confidence prints this week, along with producer prices from Australia. South Korea’s second-quarter GDP and Chinese industrial profits may also spur some event risks in the coming days. The headline event over the coming days is the Federal Reserve’s interest rate decision. Policymakers are expected to keep their accommodative policy in place, but central bank watchers will be keying in on any change in the Fed’s language to gauge the timeline on tapering QE asset purchases and normalizing interest rates.

The Kiwi Dollar’s technical posture versus the Greenback has improved despite its weak performance this month. Prices have formed a Falling Wedge pattern over the past few weeks. That, combined with positive divergence in the RSI oscillator, puts a possible breakout on the horizon. Moreover, MACD is rising, with a possible crossover of the center line nearing, a bullish momentum signal. 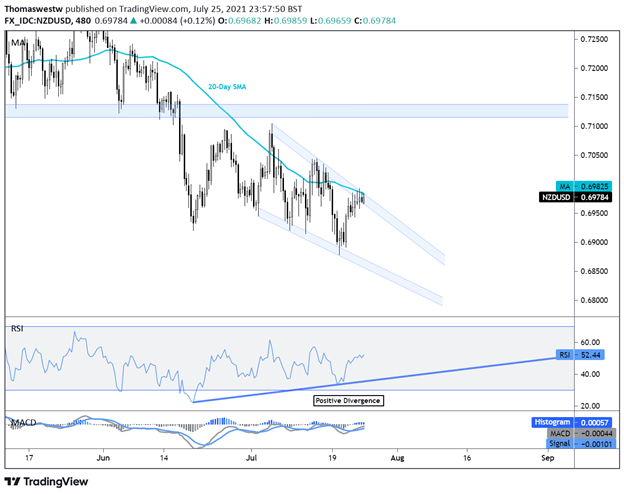