Asia-Pacific equity markets saw an upbeat session on Monday as traders eye the start of the US earnings season, which is expected to reflect the improved economic backdrop as the economy continues to open up again. The risk-sensitive Australian Dollar is little changed after opening higher against the Greenback at the start of the week.

A new wave of Covid threatens Southeast Asia. The highly transmissible Delta variant is responsible. Australia’s largest city, Sydney, is currently under a three-week lockdown, set to expire on Friday. However, the July 16 expiration date looks like it will be extended again as cases continue to increase across New South Wales (NSW). The state saw 122 new infections on Monday.

The Australian Dollar continues to trade near 2020 lows versus the US Dollar, and weakness will likely continue until the virus situation sees a fundamental improvement. Bond traders have soaked up government debt in recent weeks as the safe-haven assets become more attractive. The benchmark 10-year rate fell over 3% to start the week.

Thursday will see employment figures for June cross the wires, with analysts expecting a gain of 30k for the Australian economy, down from the prior month’s 115.2k addition. Currently, federal authorities are taking action to support the economy and boost vaccination efforts through a joint effort with the NWS state government. However, employment will likely be impacted, but the full blow won’t be seen in this week’s report.

Later today, China will report trade data for June. The consensus expectation is looking for imports to rise by 30% on a year-over-year basis, down from 51.1%, while exports are seen coming across at 23.1% from 27.9% in May. The economic print may see some reaction in the Australian Dollar given the Aussie economy’s trading relationship with China.

Last week, China eased bank lending limits in an unexpected move from the People’s Bank of China PBOC). The central bank is set to reduce the reserve requirement ratio by half a percent effective on July 15. Elsewhere, South Korea will also report trade data for June. The South Korean city of Seoul has seen social-distancing measures ramped up in recent weeks following high daily case counts.

The Australian Dollar remains in a weak stance versus the Greenback. AUD/USD is trading near its lowest level of 2020, with nearby support from the September swing high underpinning prices last week. The falling 20-day Simple Moving Average (SMA) may serve as resistance if price moves higher. The MACD line crossed above the signal line, which could indicate short-term weakness may be exhausted. 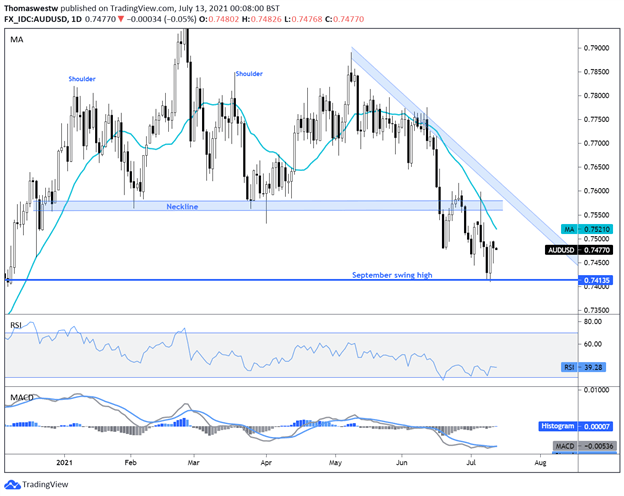