Asia-Pacific markets may be set to experience a volatile week, with several potentially hard-hitting economic events on tap in the days ahead. That puts the risk-sensitive Australian and New Zealand Dollars in focus. Both weakened against the US Dollar last week even though the broad-based DXY index moved lower, which highlights the region's perceived risks.

The Delta variant of the Covid-19 virus has thrown up another question mark over the global economic recovery. This comes as markets digest signals suggesting a move away from dovish extremes by major central banks. New Zealand’s Covid Response Minister Chris Hipkins said flights set to bring New Zealanders home from the affected regions have been suspended over the weekend.

Mr. Hipkins expressed concern over the worsening virus situation, particularly in New South Wales (NSW). That Australian state, which includes Sydney – the nation’s most populated city – saw its first locally sourced Covid death over the weekend and 77 new cases on Sunday. The city is under a stay-at-home order until July 16, although an extension is likely at this point as cases mount.

This may be a headwind for New Zealand Dollar sentiment. Traders will be watching daily case counts and deaths with a keen eye. Domestically, the island nation has seen only two new cases over the last 48 hours, according to the Ministry of Health. Policymakers’ defensive stance on border travel will likely remain in place.

Later this week, the Reserve Bank of New Zealand (RBNZ) will release its interest rate decision. The consensus expectation sees the central bank holding the Official Cash Rate (OCR) at 0.25%, according to the DailyFX Economic Calendar. However, last month’s decision signaled an interest rate hike in the second half of next year.

Overnight index swaps show markets are pricing in a 73% chance of a hike at the November meeting. That is up from 48% one week ago. Second-quarter inflation data will follow the policy meeting on the very next day. Markets expect the consumer price index (CPI) to rise 2.7% y/y, up from 1.5% in Q1.

Across the Tasman, Australia’s employment figures will cross the wires Thursday. Analysts see 30k jobs added in June, with the unemployment rate ticking down to 5.1% from 5.0%. The data print is likely to influence rate hike bets for the Reserve Bank of Australia. Still, the outlook will likely remain foggy thanks to the prevailing virus situation.

The New Zealand Dollar is off to an upbeat start against the Greenback, with NZD/USD up 0.15% to start the week. The currency pair is testing a level of resistance turned support along with a descending trendline. Some confluent resistance from the downward-sloping 20-day Simple Moving Average (SMA) will need to be cleared before a push higher. The MACD oscillator shows a bullish bias as its MACD line tracks above the signal line. 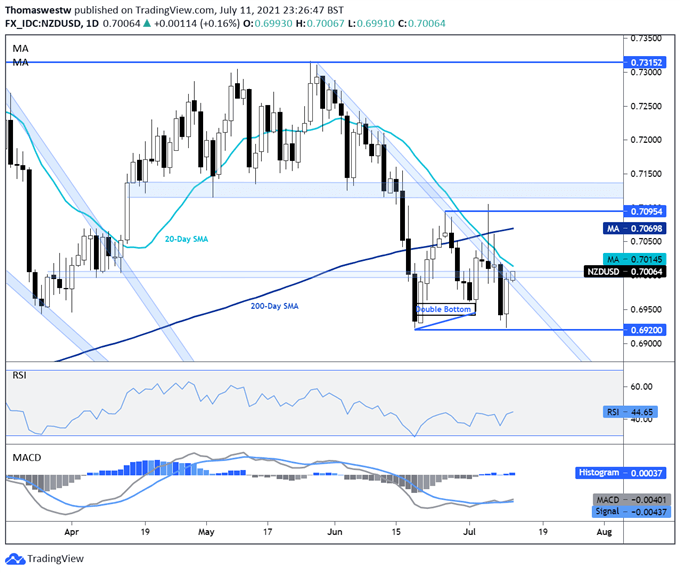