Asia Pacific markets may see a weak start on Wednesday following a bearish Wall Street session on Tuesday. The Australian Dollar is lower against the Greenback as a move lower in US equities is likely fueling some inflows into the US Dollar. The benchmark S&P 500 index broke a multi-day win streak, dropping 0.20% on the day, while the Dow Jones saw a larger drop of 0.60%.

The move lower in US equities doesn’t necessarily reflect a broad sense of risk aversion, given the preceding 7-day run-up. Investors are likely taking some profit, which can be seen as skimming some froth out of the markets. The US Dollar was 0.30% higher at the New York closing bell via the DXY index. Treasury yields were lower across the curve as investors moved into US government bonds.

That move in bond yields may reflect concerns that the economy may be reaching its high point in the near term. Those concerns are underscored by the highly transmissible Delta Covid variant spreading aggressively across the globe. Sydney, Australia’s largest city, is currently under a two-week lockdown, and authorities are considering an extension after New South Wales reported 35 new locally sourced Covid cases on Monday.

However, it’s not all bad news in Australia, with the cities of Darwin, Perth, and Brisbane ending lockdowns earlier this week. The trajectory of cases and corresponding lockdowns will likely significantly impact economic growth in the short to medium term. Moreover, Australia continues to lag the United States and Europe in its vaccination rollout, posing an additional threat to reoccurring case flair-ups.

Earlier this week, the Reserve Bank of Australia’s Governor, Philip Lowe, spoke on monetary policy. The central bank chief kept its dovish outlook untouched, which gave no favors to the Australian Dollar. Wage growth and inflation have not been as strong as the RBA would like before implying any premature rollback in monetary support. Specifically, Governor Lowe stated earlier this week:

“The Board does not intend to increase the cash rate until inflation is sustainably within the 2 to 3 per cent range. It is not enough for inflation to be forecast in this range. We want to see results before we change interest rates. Any increase in the cash rate will take place after bond purchases have ended.”

The Australian Dollar remains below its 200-day Simple Moving Average (SMA) against the US Dollar. Downward momentum from June appears to have carried over from June, although the pace has slowed, with AUD/USD down near 0.10% month-to-date. However, a bearish crossover between the 20-day SMA and the 200-day SMA completed today, which may bring additional overhead pressure onto the currency pair. 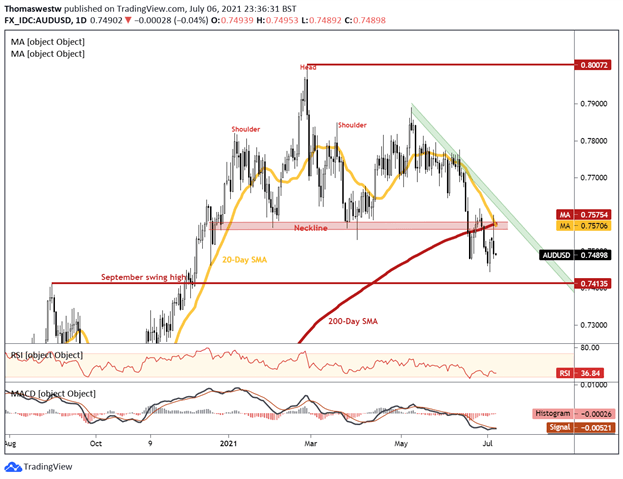