Broad US Dollar strength worked against the Australian Dollar and its regional counterpart, the New Zealand Dollar, overnight. June was a stellar period for the Greenback when it marked its best month in 5 years. AUD/USD traded down to its lowest point of the year early this morning, as headwinds built against the economic recovery in Australia.

Australia has come under another round of lockdowns this week after a reemergence in Covid cases. While the country has successfully managed outbreaks up until now, the highly transmissible Delta variant – thought to be responsible for the current cases – appears to be outmaneuvering defensive measures that have been successful in the past.

Now, policy makers are calling for renewed travel restrictions and other social distancing measures to be enacted. Annastacia Palaszczuk, Queensland Premier, is advocating for a ban on international travelers from entering the country. Aussies remain highly susceptible to the spread of Covid, given only 6% of the country is fully vaccinated. That leaves the only options for combatting a new spread to economically crippling measures such as lockdowns and business closures.

The recent developments will likely put a hit on the Reserve Bank of Australia’s (RBA) outlook, which is likely already being priced into the currency as traders hedge earlier hawkish bets. The central bank’s governor, Philip Lowe, was slated to speak this week, but the event was canceled due to Sydney’s virus restrictions.

Elsewhere, crude and Brent oil benchmark prices rose after OPEC+ pushed a ministerial meeting back to Friday. The United Arab Emirates reportedly blocked a move that would see 400k barrels per day of oil released into markets from August to December, according to Reuters. The UAE is seeking the baseline in which cuts are calculated to be changed.

Today’s economic docket includes housing market data out of Australia via month-over-month home loans data and investment lending for homes, both for May. Later in the day, India will see its preliminary figure on June’s balance of trade cross the wires. The trading week will wrap up with the highly anticipated US non-farm payrolls report (NFP).

The Australian Dollar’s technical posture weakened further against the Greenback overnight. AUD/USD dropped to a fresh multi-month low, pinging the lowest level traded at since December 2020. The current move is on track to record a fifth daily consecutive drop, with the 20-day Simple Moving Average (SMA) now gearing up for a move below its 200-day SMA, a bearish signal. 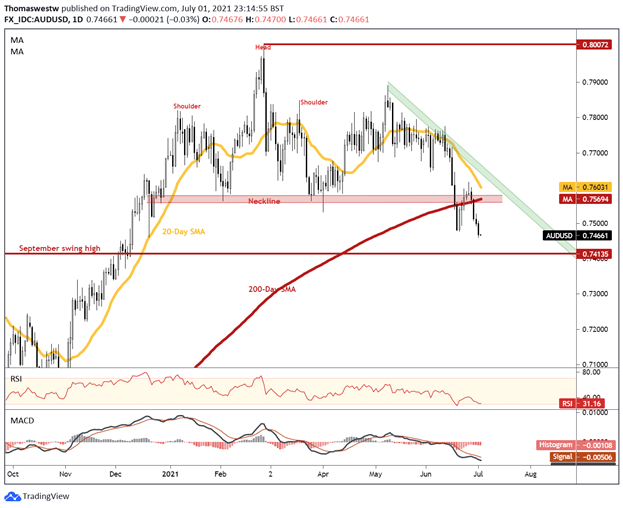