The Australian Dollar will look to extend the winning streak seen last week. The heightened propensity to take on risk may extend into the days ahead following a mixed US non-farm payroll report on Friday. The Ai Group Services Index for May kicked off the weekly economic docket, with the services sector gauge coming across the wires at 59.0 versus the prior month’s 61.0 print, which was the highest mark since October 2003. While down from the prior month, the +50 read reflects expansion in the economy.

The Australian Dollar was little phased on the economic print . Instead, traders are likely focused on trade data from China – Australia’s largest trading partner – slated for release later today. Analysts expect to see a surplus of $50.5B as economies across the globe continue to accelerate reopening efforts. That is still well off from the surpluses seen last year, before China scaled back some stimulus measures.

As global vaccinations accelerate, demand drivers look ready to reflect well on China’s export numbers. That may bode well for the Australian Dollar. Weak Chinese inflows may hurt the commodity-linked currency however, as traders fret about reduced demand for key metals like iron ore.

Speaking of China, the Yuan remains near a 3-year high despite cooling off modestly last week. The currency has been bolstered by a strong economic recovery, capital inflows, and an increased appetite for local government bonds. Policy makers have attempted to curb Yuan speculation, stepping up regulatory actions, but stronger steps are unlikely given Beijing’s desire to internationalize the currency.

Elsewhere, Japan will see several economic data prints early in the Monday trading session, including April’s preliminary Leading Economic Index. A state of emergency remains in place across major Japanese cities until June 20. The 2021 Tokyo Olympics are set to begin next month, despite safety concerns as Japan’s vaccine rollout continues to trail most developed nations.

The Australian Dollar made a swift recovery against the US Dollar late last week as the mixed US NFP report dragged the Greenback lower. The moved pushed AUD/USD back to its 20-day Simple Moving Average (SMA) after sinking to an early-April level of resistance now turned support, slicing through the 50-day SMA on both sides in the process.

A descending trendline, along with the falling 20-day SMA, now appear to be the nearest technical barriers to the upside. Although recently breached, a former level of support which made up the lower bound of a Descending Triangle may serve as support on a downside move. Overall, the current position leaves the pair looking mostly neutral at the current levels, with MACD and RSI moving sideways. 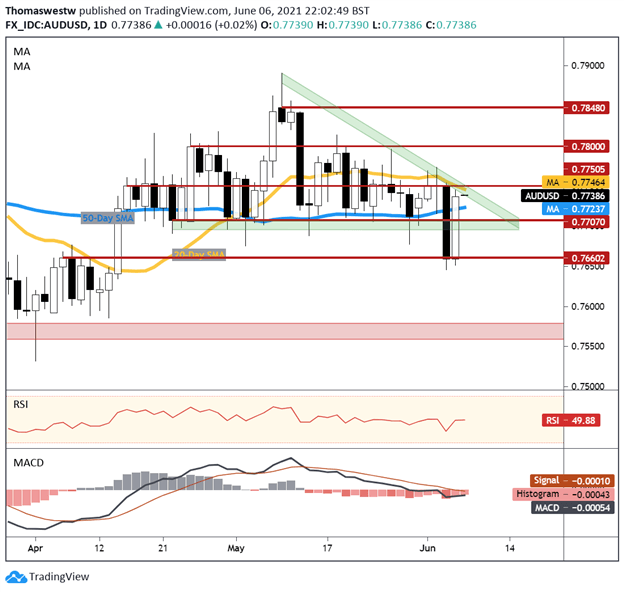