Asia-Pacific stocks may have trouble extending gains seen on Tuesday after Wall Street moved lower during the New York session. Technology stocks made small gains, but the S&P 500 and Dow Jones Industrial Average (DJIA) closed in the red, losing 0.21% and 0.24%, respectively. Investors were met with several rounds of less-than-stellar economic activity before the opening bell.

Treasury yields resumed a move lower following strong market demand in the 2-year note auction. The auction’s bid-to-cover ratio – used to measure demand strength – came across at 2.74. The benchmark 10-year yield fell to a multi-week low as the yield curve flattened. The US Dollar joined the downside move in yields, with the DXY index giving up 0.20% following the NY closing bell.

Inflation concerns are also easing, which is helping to alleviate woes among bond traders. Federal Reserve Vice Chair Richard Clarida spoke to Yahoo Finance Tuesday on inflation, stating “that increase (CPI) certainly caught mine and others’ attention.” Mr. Clarida went on to repeat calls from his colleagues that the recent increase in inflation will be largely transitory.

Today’s rate decision from the Reserve Bank of New Zealand (RBNZ) will likely be the most prevalent sentiment driver during the APAC session. Traders will key in on the RBNZ’s policy statement, which will include an updated economic forecast. The New Zealand economy’s resilience since the latest policy update may see an upgrade to the growth outlook, which could bolster calls for a near-term rate hike.

The consensus forecast sees the RBNZ leaving its Overnight Cash Rate (OCR) standing firm at 0.25%. While economic activity has impressed analysts in recent months resulting in upward policy outlook revisions, a surprise rate hike at this meeting is very unlikely given the ongoing uncertainty around Covid. In a recent report, New Zealand Institute of Economic Research Shadow Board member Stephen Toplis stated:

“Tactically, the RBNZ will not want to scare the horses, but its objectives are close to being met, so the need for the current degree of stimulus to be maintained is waning rapidly.”

Earlier this morning, New Zealand reported its April trade data, with exports and imports crossing the wires at N$5.37 billion and N$4.98 billion, respectively. Outside of New Zealand, Australia will see the April Westpac Leading Index and construction work done for the first-quarter drop. Elsewhere, Japan’s coincident index is due out.

An interruption to rising metal prices has likely added to overhead pressure on the Australian Dollar, with iron ore -- one of Australia’s largest exports – falling over 20%. Commodity traders are concerned over recent actions taken by China to tamp down on speculative asset bubbles. The People’s Bank of China (PBOC) has quietly been reducing credit in the markets as it attempts to balance concerns over speculation amid a still-fragile economy. While the global recovery narrative remains supportive for metals, a cautious approach for speculative traders is warranted, with prices already at multi-year highs. 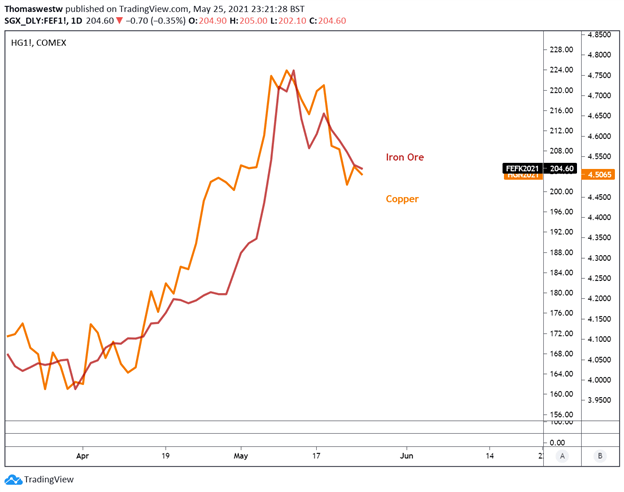 AUD/USD made an intraday move above its 20-day Simple Moving Average (SMA) but was turned around and now trades back at the 0.7750 level, a former area of resistance seen through early to mid-April. That said, the 20-day SMA appears to be key to overcoming before moving higher. Alternatively, the supportive 50-day SMA lies to the downside near 0.7713. Further consolidation between the two key SMAs may continue in the near term. 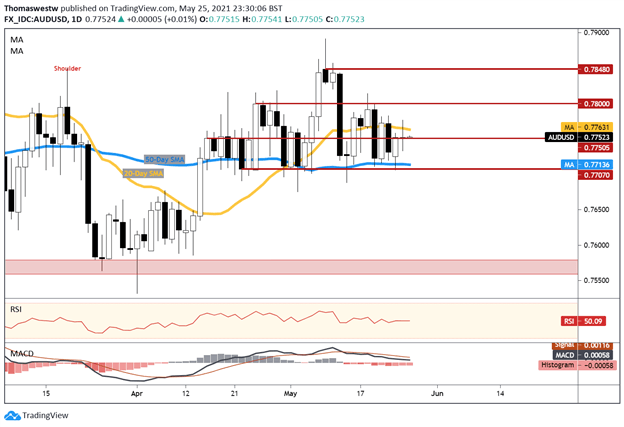