AUD/USD May Rise Ahead, Japanese and South Korean Vaccination Efforts in Focus

Early Wednesday, South Korea’s April consumer confidence print crossed the wires at 102.2, up from the prior month’s read of 100.5. The beat comes despite public blowback over the South Korean government’s vaccine administration rollout. Less than 10% of the country’s populace has received a single dose. However, the Korea Disease Control and Prevention Agency secured 40 million additional Pfizer shots, enough for the entire population.

While the global economy has bounced back stronger than expected over the past few months, Covid flair-ups and mutations have put a question mark over just how long the recovery can go without hitting a major road bump. Japan is one major economy experiencing an additional wave of virus infections, with the country declaring a state of emergency earlier this week for Tokyo and other major metro areas. Like South Korea, Japan has lagged in its vaccination efforts compared to countries like the United States.

Regardless, the Bank of Japan (BoJ) Tuesday upgraded its GDP forecasts for 2021 and 2022 while holding interest rates steady. The Japanese Yen strengthened following the BoJ decision but ultimately gave back its gains. USD/JPY is up over half a percent overnight, breaching above its 50-day Simple Moving Average in the process. Tokyo has less than 100 days before the opening of the 2021 Olympic games, although some are doubting if the event will be able to be carried out in a safe fashion.

Australia will report a potentially high-impact market event today in the form of inflation data for Q1, with analysts expecting a 1.4% print on a year-over-year (YoY) basis, according to the DailyFX Economic Calendar. The YoY expectation reflects a 0.5% increase from the prior print, likely driven by input costs on home building, energy costs, and soaring rental home prices. A beat on tonight’s figure may push AUD/USD higher if traders believe it will nudge the Reserve Bank of Australia into a less dovish stance.

The Australian Dollar is giving up gains from earlier in the week against the US Dollar but an area of prior resistance at 0.7750 may step in to provide support. If so, AUD/USD will look to break above the 0.78 handle, which turned away price on Tuesday. A break lower would see the 50-day and 100-day Simple Moving Averages offer possible zones of support, however. Overall, today’s CPI print may dictate direction. 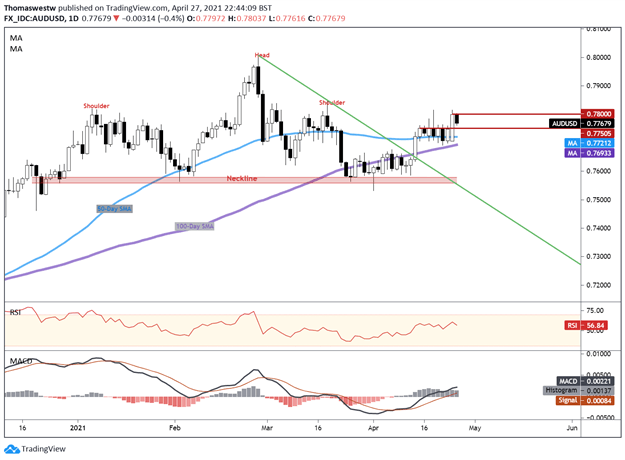