US markets ended the week on a positive note following a blowout Non-Farm Payrolls report Friday. The February jobs report showed the US economy added 379k jobs versus the 182k expected figure. The Dow Jones Industrial Average (DJIA) gained 1.82% during the week. Technology stocks failed to keep pace however, with the Nasdaq 100 index (NDX) dropping 1.87%. The Russell 200 index lost 0.40% as small-cap stocks also failed to keep up with their blue-chip counterparts.

Rising government bond yields are one area of concern for markets currently as higher borrowing costs alter market dynamics and force money managers to reallocate assets. The 10-year Treasury yield rose over 10% higher last week and the longer-term 30-year yield pushed 6.54% higher, respectively. Moreover, the shorter end of the curve also saw yields rise, with the 5-year making an 8% advance on the week.

Moreover, yields may continue rising this week – which could further pressure equity prices – after the US Senate passed President Joe Biden’s US$1.9 trillion Covid-19 stimulus package. The massive stimulus bill may spur another large increase in Treasuries issued by the US government. That funding mechanism pressures yields higher as it increases the supply of Treasury securities on the market. The House is slated to take up the bill this week when it is expected to pass and go on to the President’s desk to be signed into law. 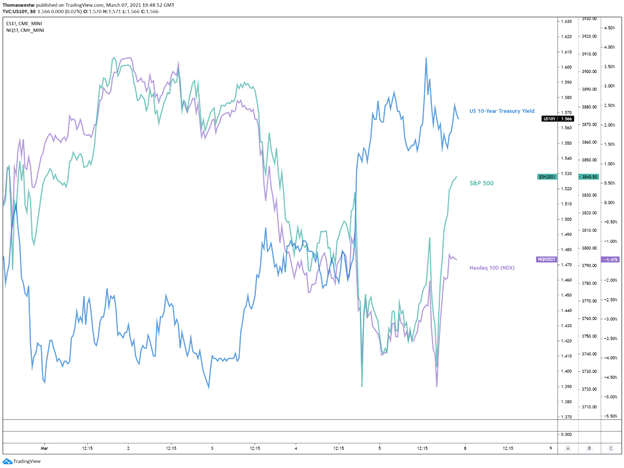 Monday’s economic calendar is rather sparse when looking for market moving events, but Japan is slated to release its final read on Q4 GDP growth. Australia will see Westpac Consumer Confidence for March cross the wires on Tuesday. Then, later in the week, China will give inflation and new Yuan loans data. New Zealand will release business PMI figures for February.

China last week announced an economic growth target of over 6% in the coming year during its National People’s Congress. The figure is on the lower side of what many economists were projecting as the world’s second-largest economy looks to recover from the Covid-19 pandemic. While China continues to make progress in managing the virus within its borders along with most modern economies, Brazil saw a notable uptick in cases and deaths last week.

The Australian Dollar broke below trendline support against the US Dollar last week, along with its 50-day Simple Moving Average (SMA). The technical breach marked a short-term victory for Aussie-Dollar bears. The 78.6% Fibonacci retracement level now looks to serve as support should AUD/USD continue its downward trajectory.

Bulls may look to recapture the 50-day SMA to restore a positive price outlook. The MACD oscillator is on the verge of making a bearish cross below its signal line however, which could open the door to further losses. Meanwhile, the Relative Strength Index (RSI) is trending sideways in neutral territory. If the aforementioned Fib level breaks to the downside, the 100-day SMA may move into focus. 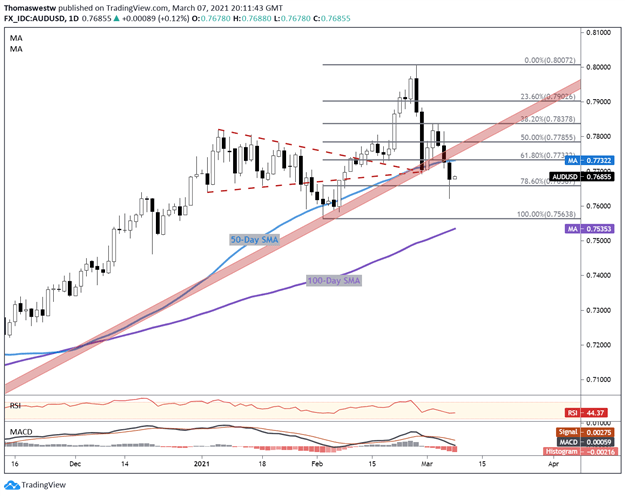