Traders responded with overwhelming applause to start the week as Pfizer announced a groundbreaking step forward in their vaccine efforts against Covid. The U.S. trading session saw the Dow Jones Index and S&P 500 Index close 2.95% and 1.17% higher, respectively. In line with market sentiment, typical risk-on assets gave way to heavy selling pressure. Gold dropped over 5%. The haven-linked US Dollar, however, gained as the Japanese Yen sold off; a likely result of pre-election trades being unwound. 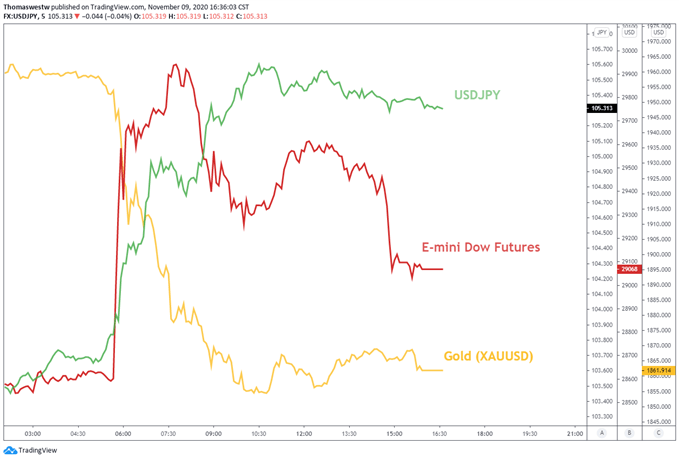 In addition to Monday’s vaccine headline, markets likely reflected on U.S. election clarity. This followed now US President-Elect Biden’s path to victory gaining consensus from reporting agencies like AP and Fox News. Still, President Trump has yet to concede the election despite his challenger exceeding the 270 electoral votes required. Legal challenges are being pursued from the Trump administration, however, it remains unclear if there is a path, if any, to reverse the current vote count across several states. 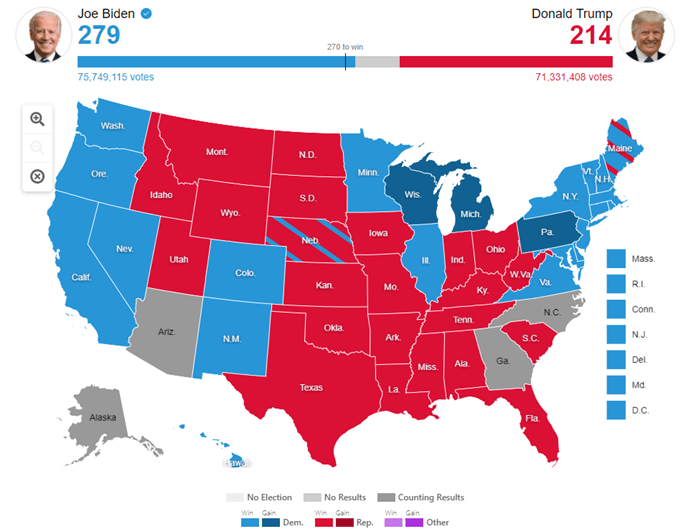 Assuming the current path plays out in the US political landscape, a Biden administration would still face an uphill battle implementing policy, including fiscal relief, against a Republican controlled Senate. Nevertheless, a wildcard lies with the runoff Senate races in Georgia, giving Democrats a possible opportunity to form a 50-50 split, allowing Vice President-Elect Kamala Harris to cast tie-breaking votes. This would bolster hopes of a larger stimulus deal for the US economy.

As traders continue to unwind pre-election trades that aimed to hedge volatility, risk-on market conditions will likely spill over into the Asia Pacific session. U.S. equity futures are pointing higher. On the currency front, the Japanese Yen is edging higher against the US Dollar, but the large chunk of the earlier move in USD/JPY remains intact.

Tuesday’s trading session will have eyes on Chinese inflation data. The DailyFX Economic Calendar shows the YoY rate for October is expected to cross the wires at 0.8 percent, down from the prior month’s 1.7 percent. The Yuan has strengthened considerably in recent days, with USD/CNH dropping to 6.5472 earlier today, the lowest mark since June 2018.

Monday’s break lower in USD/CNH saw a key level of prior support/resistance from 2015 to 2018 hold near the 6.5430 level. Below that, a defined area of resistance from September 2017 could look to hold. There is some space to go until getting there where new areas of support could form. Traders may wait and see for price action to hold and consolidate before taking bets to the upside. 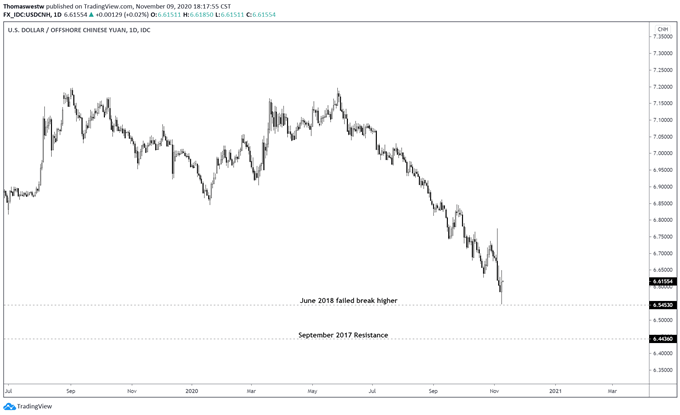