35 DAYS UNTIL THE US PRESIDENTIAL ELECTION

Investors have been anxiously waiting for the first round of the 2020 US presidential debate between Democratic nominee Joe Biden and incumbent President Donald Trump. The debate will be occurring from 9:00-10:30 PM ET at Case Reserve University in Cleveland with Fox News anchor Chris Wallace serving as themoderator. For a more in-depth look at the debate, see my comprehensive preview here. 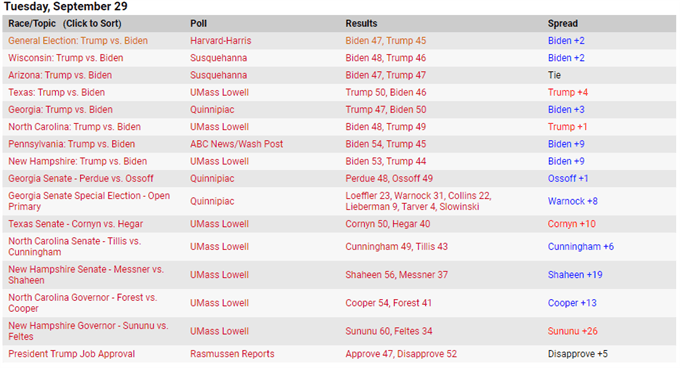 Election polls continue to show Mr. Biden in the lead, though the most recent data from Harvard-Harris shows a significantly-smaller margin than the typical 7-point lead he has held for the past few weeks. Having said that, other polling agencies indicate the former Vice President still maintains a comfortable lead over his opponent.

While typically debates do not have an overwhelming impact on voter intentions, the controversial nature of this election amid volatile times could impact the polls. The recent news about Mr. Trump having only paid $750 in taxes in 2016 and 2017 may hurt his chances of re-election. One way he may be able to offset this complication is if he is able to outperform Mr. Biden

Meanwhile, US fiscal stimulus talks between Republicans and Democrats remains at the front of every investor’s mind as the urgency for more aid grows by the day. The latter group is drafting a $2.4 trillion relief bill, which, while smaller than the over $3t aid in March is still $1t over what the Trump administration is willing to sign. How that is resolved may have a significant impact on equity markets.

Signs of coordination among policymakers and revived hope of additional stimulus may buttress risk appetite and push equity markets higher. Haven-linked assets like the US Dollar may fall and commodities like gold could rise as a function of a weaker Greenback. Conversely, bipartisan intransigence may see this dynamic reverse.

Gold prices are coming up against former support-turned-resistance at 1899.77 after falling over 4.50 percent following their break below what appeared to be a Symmetrical Triangle pattern. Puncturing resistance could open the door for further gains, though XAU/USD’s ascent may be capped at the lowest of three major shelves at 1969.16 with the other two above it at 2001.93 and 2069.77, respectively. 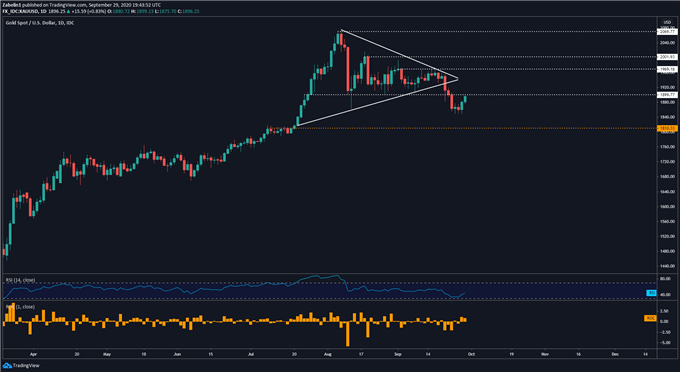