47 DAYS UNTIL THE US PRESIDENTIAL ELECTION

With less than 50 days to go until the US presidential election, markets are tensing up ahead of the first debate between Democratic nominee Joe Biden and President Donald Trump on September 29. According to data from RealClearPolitics, the spread between the two candidates for the general election has moderately narrowed to a 5.8-point spread.

How can politics drive markets each week?
What Do Other Traders' Buy/Sell Bets Say About Price Trends?
Register for webinar
Join now
Webinar has ended 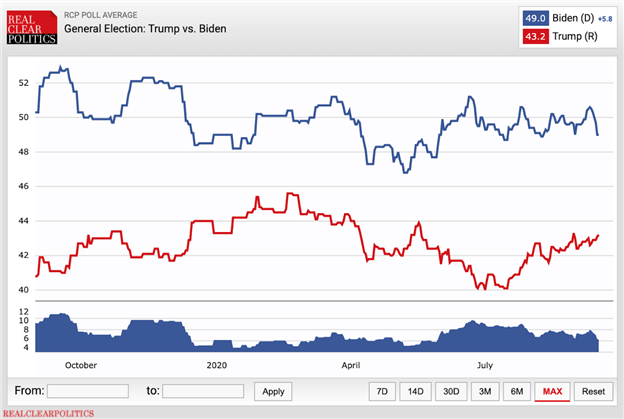 This marks a notable deviation from the roughly 7-point lead Mr. Biden has been able to maintain over Trump for some time. Attention to how battleground states like Florida and Pennsylvania perform will be more crucial as campaigns put - in some cases as much as $30m - in TV ad money in key swing states like Florida to capture as many electoral votes as possible.

However, with increasingly less time until November 3, the probability of wild cards being drawn out are rising. Former presidential candidate Mike Bloomberg has pledged to spend over $100m in Florida to support Biden. This frees up more cash to spend in other states in an effort to squeeze out Mr. Trump. However, the president also has an ace up his sleeve.

GOP mega donor Sheldon Adelson has pledged to spend between $20m-$50m for the new pro-Trump super PAC called Preserve America. Pressure on the incumbent to garner more funds may become more urgent after the Biden campaign - together with the DNC - raked in $364.5m in August compared to the GOP which raised $210m last month.

With less financial capital, Mr. Trump may have to start using social capital. This may manifest as bolder statements and policy measures during the campaign and debates as a way to draw attention away from the TV ad time his opponent is using. Increased political volatility may dent already-fragile markets and drive up demand for the haven-linked USD and anti-risk JPY higher.

EUR/USD has broken below both upward-sloping support zones - marked as “Uptrend 1” and “Uptrend 2” - potentially setting the pair up for a reversal. However, clearing a formidable but narrow support zone between 1.1720 and 1.1698 may be critical in marking the start of a meaningful pullback. 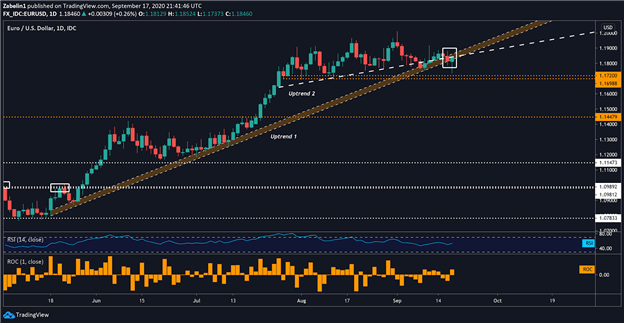