50 DAYS UNTIL THE US PRESIDENTIAL ELECTION

We are at the official 100-day midpoint before the 2020 US presidential election, and polls are showing an increasingly favorable outlook for Democratic nominee Joe Biden. In the general election, the former Vice President continues to maintain his lead over US President Donald Trump. The key trend to look out for will also be how each candidate performs in swing states.

According to Politico, a number of swing states remain up in the air. The race for victory in these key states between Biden and Trump is tightening ahead of the first presidential debate on September 29. A crucial and well-known one is Florida. Not only does it hold the third most electoral votes but every candidate that won this state has gone to the White House since 1992. 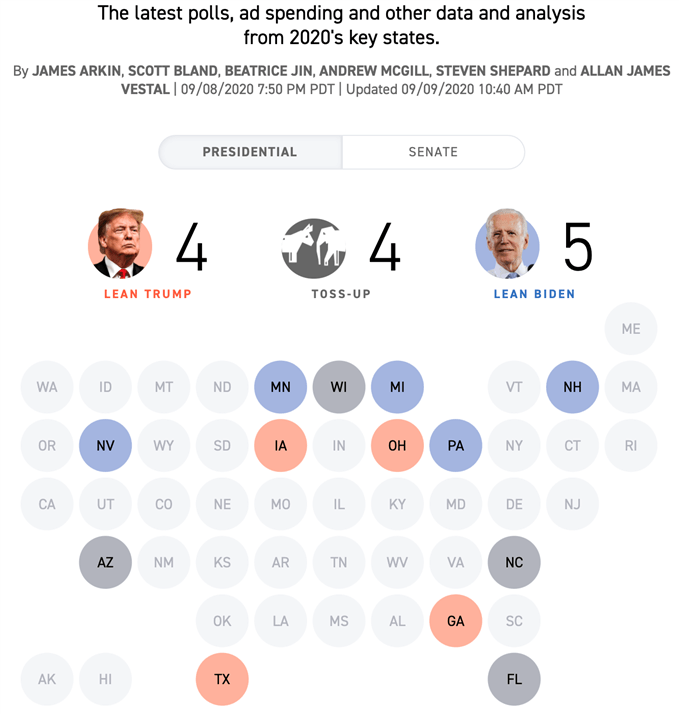 At the time of writing, the Biden-Trump spread for Florida is approximately 3 percent with about 49% supporting the former and 46% for the latter. Not entirely by coincidence, this is also the state where - to date - each candidate has spent the most in TV ad money with the Biden campaign putting a whopping $30 million and Trump’s campaign putting $20 million.

After intense deliberations, ByteDance’s social media spawn TikTok has agreed to partner up with tech-giant Oracle, rejecting Microsoft’s bid. Oracle will now serve as TikTok’s technology partner and will manage user data amid concerns from the Trump administration that users’ information is being harnessed by China’s Communist Party.

Given Oracle’s past of working with the CIA, Navy Intelligence among a slew of other high-security agencies, it made more sense to go with them rather than Microsoft. TikTok and Oracle will be working in a partnership rather than it being a direct sale and acquisition of the former to the latter.

However, with stricter Chinese laws on technology exports - specifically regarding artificial intelligence - Oracle’s control over TikTok may be somewhat limited. From a macroeconomic, geopolitical perspective, the partnership is a much-welcomed development in US-China relations, though it is unlikely this small ray of sun will thaw the glacier of issues that lie in wait.

Since topping in early September, the S&P 500 index (SPX) has experienced what appears to be a corrective pullback and is trading a little over 5 percent down from record-highs. The sharp decline resulted in the invalidation of the March uptrend that not only survived the June 11 pullback but has carried the S&P 500 over 60 percent since the March lows. 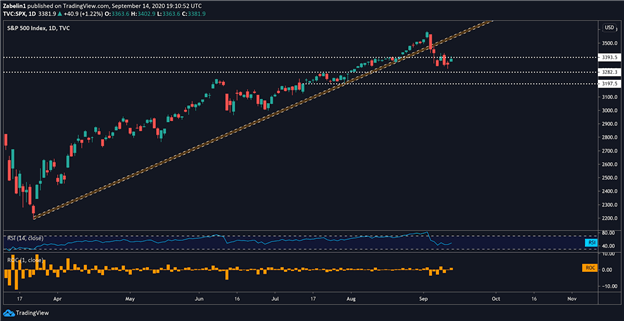 Looking ahead, the next major hurdle to clear will be a key inflection point that marked the previous all-time high before stocks cratered in mid-February at 3393.5 The benchmark has stalled around this level before in early August. Clearing it again with follow-through may cause bears to retreat to their caves and bulls to blast the pen open.