54 DAYS UNTIL THE US PRESIDENTIAL ELECTION

Former Vice President and Democratic nominee Joe Biden continues to maintain a lead in the polls over President Donald Trump. This is not only true of the general election but also of Mr. Biden’s popularity in key swing states. Having said that, investors should be cautious when assessing the outcome of the election even before the upcoming presidential debate on the 29th. 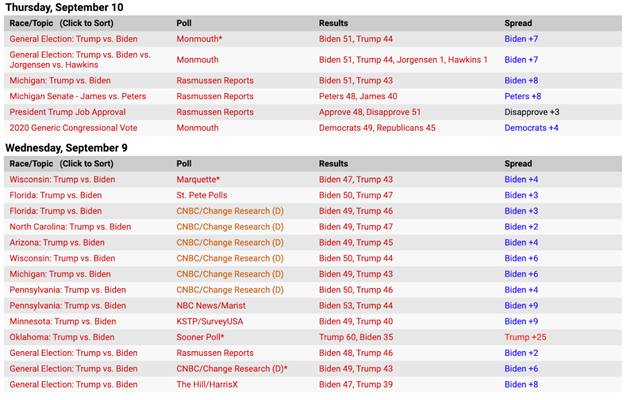 On Thursday, news broke that the Republicans’ coronavirus relief bill was shot down in the Senate by all the Democrats and one Republican. The left side of the aisle was reportedly dissatisfied with the watered-down stimulus bill that included a reduction of unemployment insurance to $300 per week from $600.

The bill would have also included new small business loans, additional funding for schools and directed money towards coronavirus treatment, vaccines and testing. The legislation did not include another round of US$1200 stimulus checks that the first stimulus bill incorporated. Democrats were also unhappy with the bill not including provisions for local and state governments.

Senate Majority Leader Mitch McConnell accused Democrats of blocking the effort on partisan grounds. The passage of another Republican-drafted relief bill could result in a more favorable tilt in polling data ahead of key election dates. Looking ahead, political friction in the coming months may only be amplified and further push back the timeline for more fiscal policy support.

Silver prices have consolidatedsince late July and leading into early August after the precious metal topped at a seven-year high at 29.8/oz. Since then, XAG/USD has drifted sideways, buttressed by two shelves at 26.414 and 24.371. A break to the upside opens the door to retesting the multi-year swing high. 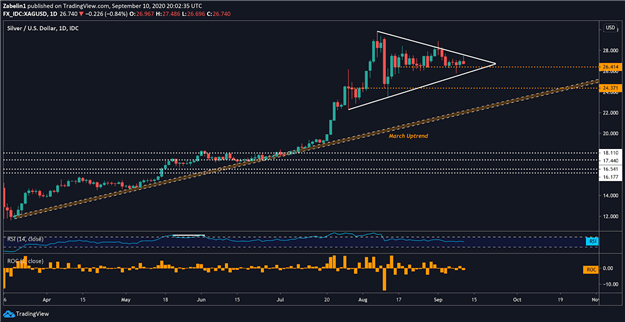 Conversely, if XAG/USD breaks back belowresistance-turned-support at the early-August top, silver prices may experience a notable pullback. While a continuation pattern known as a Symmetrical Triangle appears to be forming - and therefore implies a resumption of the prior uptrend after a period of consolidation - the monthly chart shows a far gloomier picture. 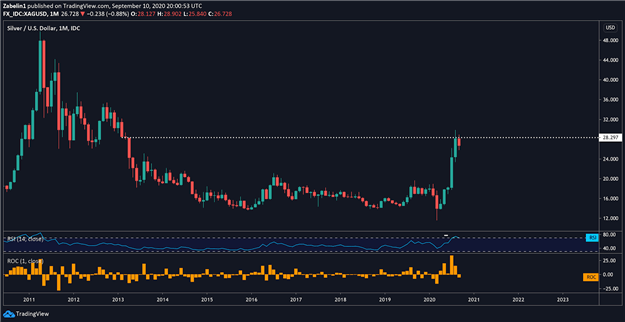 Seen this way, silver prices appear to be showing signs of topping at a familiar inflection point going back to early 2013 at 28.202. Before falling further, XAG/USD was trading at this critical level roughly from the start of February to the beginning of April before decidedly turning lower. Familiar signs of hesitation could send a chilling message about the short-term outlook.