62 DAYS UNTIL THE US PRESIDENTIAL ELECTION

Leading up to and during the Republican National Convention, the spread between President Donald Trump and Democratic nominee Joe Biden have narrowed. However, polling data as of September 2 show Mr. Biden ahead of Trump on average by 8 points. Having said that, RealClearPolitics’ betting average between the two candidates is at its narrowest spread since late-May/early-June when the polls started to favor Biden. 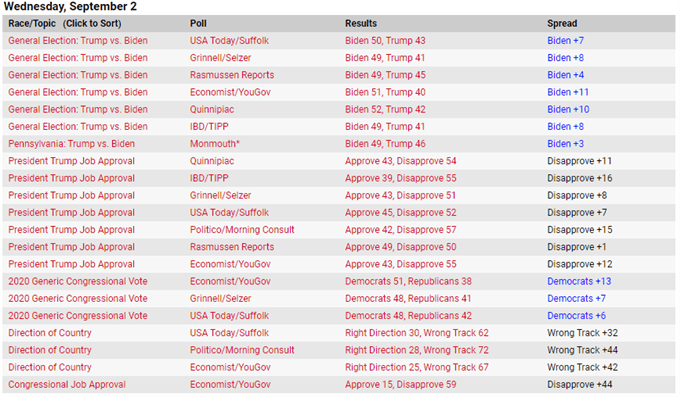 With a relatively sparse political docket, the next major event to watch for pertaining to the 2020 election will be the first presidential debate on September 29 in Cleveland. Fox News anchor Chris Wallace is set to moderate the first debate, according to an announcement put forth by the non-partisan Commission on Presidential Debates (CPD).

Seeing how the polls are impacted by the debates will be crucial, though it should be noted that data – particularly as it relates to politics – can be misleading. On this day four years ago, the spread between former Secretary of State Hillary Clinton and Donald Trump was 4.1 points. Even on election day, the spread was wider than then it is now between Biden and Trump, and the outcome was counter to expectations.

In short, the lesson to take away is the fickle nature of polls and geopolitical risks in general. As a result, while helpful, polling statistics may not entirely represent the voting outcome even on the day of the election. Having said that, market volatility may still ensue leading up to, during and after the upcoming presidential debates because of the embedded premium put on polling data ahead of an election.

AUD/NZD is trading at a crucial cross-section between former resistance-turned-support at 1.0809 and the upper crust of a five-year descending resistance channel. Following the release of worse-than-expected Australian GDP, the pair experienced its biggest one-day decline since the pandemic selloff in March. How AUD/NZD interacts with this level could be trend-defining.