The sentiment-linked New Zealand Dollar and similarly-behaving Australian Dollar were some of the best-performing G10 currencies on Friday as Wall Street wrapped up two consecutive weeks of gains. The Dow Jones and S&P 500 closed 2.99% and 2.68% to the upside respectively as the haven-linked US Dollar and anti-risk Japanese Yen underperformed.

Markets may have continued to bet on a cautious reopening of the United States economy after President Donald Trump released guidelines on these measures as Gilead Sciences Inc. reported on a virus drug trial. Boeing – a major aircraft manufacturer based in the US – announced plans to restart production at its manufacturing plant in the Seattle area.

Over the weekend, reports supporting the slowdown in COVID-19 case growth continued to flow. New York State Governor Andrew Cuomo said that they appear to be “on the other side” of outbreaks. Meanwhile French Prime Minister Edouard Philippe said that end-of-lockdown plans are to be presented in the next two weeks. This is as local fatalities from the virus slowed to the lowest pace in about two weeks.

With that in mind, weekend Wall Street futures – courtesy of IG – are pointing only slightly higher heading into Monday’s Asia Pacific trading session. That could speak to a mixed tone to start the week off. NZD/USD may see volatility on first-quarter New Zealand CPI data. But the pair will likely focus on trends in global sentiment for follow-through. The latter may sour as investors brace for a disappointing earnings season.

NZD/USD bounced on the 0.5918 inflection point after the pair closed under rising support from last month’s bottom – red-dashed line on the 4-hour chart below. Now new rising support – red parallel lines – seems to be guiding the pair higher. A push through late-March highs – 0.6039-0.6069 – exposes 0.6130 as the pair climbs towards falling resistance from December 2019. Otherwise a turn lower places the focus on 0.5918. 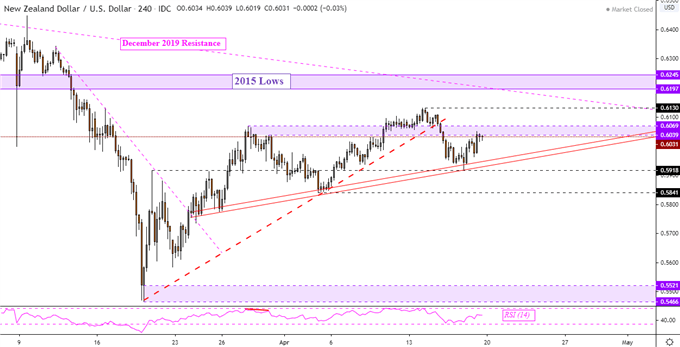