The British Pound underperformed Monday and the anti-risk Japanese Yen may gain in the session ahead. The Pound succumbed to selling pressure as investors likely remained anxious about this year’s timeframe for EU-UK trade negotiations after Brexit officially began last week. Earlier in the session, there was a tense round of verbal spat between UK Prime Minister Boris Johnson and EU Chief Negotiator Michel Barnier.

Elsewhere the focus for markets remained on the deadly coronavirus that has been emanating from Central China across the world. After being offline for the Lunar New Year, the Shanghai Composite gapped over 8.5% lower as February began with local authorities attempting to stem selling pressure. Sentiment partially recovered throughout the European and North American sessions, but volatility was elevated.

The US Dollar aimed little higher, with most of its upside progress seen during the European session as Sterling depreciated. Better-than-expected US ISM Manufacturing offered a further lift to the Greenback as local bond yields rose. Sentiment-linked crude oil prices fell as WTI closed at its lowest sine early January 2019. Fears of slowing growth in the world’s second-largest economy likely cooled demand prospects.

The anti-risk Japanese Yen could benefit on Tuesday if fears around global growth heat up. China has said that it will review its 2020 economic growth target due to the virus. Estimates from The Economist hint that first-quarter expansion could fall to as little as 2% from 6% prior to the outbreak. Chinese officials are reportedly seeking flexibility around U.S. trade targets around the “phase-one” deal amid the Wuhan virus.

How will the RBA impact the trajectory of AUD?
What Do Other Traders' Buy/Sell Bets Say About Price Trends?
Register for webinar
Join now
Webinar has ended

USD/JPY bounced on the rising trend line from late August 2019 – blue line on the chart below. The near-term downtrend remains intact however after prices topped in January just under 110.29. That latter also marked a false breakout through falling resistance from November 2018, placing the focus on Yen strength against the Dollar. Falling through support exposes the psychological barrier between 107.65 to 108.01. 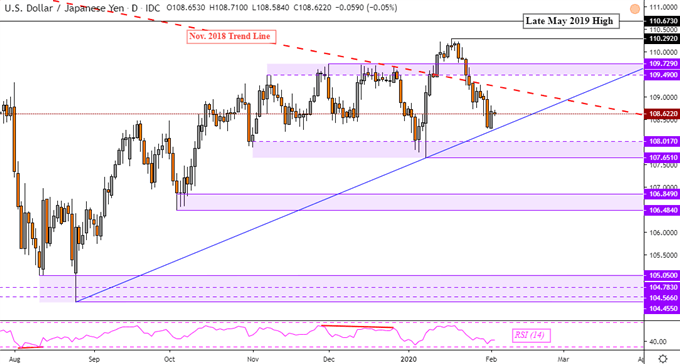