The sentiment-linked Australian and New Zealand Dollars trimmed their advance on Friday as optimism around the US-China “phase one” trade deal faded. Risk appetite swelled into the end of last week as it looked increasingly likely that the two countries were on track to avoid further tariff escalation. Yet, as it became clear what the details of the outcome were, the S&P 500 erased its gains and finished the day little changed.

The United States withheld from raising tariffs against China over the weekend, agreeing to trim levies on about $120b in Chinese goods in half to 7.5 percent. In exchange, China promised increased agricultural purchases with President Donald Trump hoping for them to buy about $50b annually ahead. A signing of the agreement is expected early next month.

Specifics of sticking issues such as Chinese subsidies and intellectual property theft were absent as Trump even left the door open to discussing “phase two” after 2020. White House Economic Adviser Larry Kudlow left the door open to reimposing tariffs over future disputes. A combination of these may have been why we saw some hesitation from financial markets, US front-end government bond yields fell.

The British Pound outperformed as the UK Conservative Party won a landslide victory during Thursday’s general election. This has made it very likely that Prime Minister Boris Johnson proceeds to initiate taking the country out of the European Union with his withdrawal agreement by the end of January. Still, late gains in the US Dollar on Friday helped it trim heavy losses against Sterling and the Euro as well.

Equities may proceed with caution as the new week begins, though there may be room for slight gains in regional bourses on a de-escalation in US-China trade tensions. The AUD/USD will be eyeing Chinese industrial production and retail sales data. Lately, outcomes from the world’s second-largest economy have been tending to outperform relative to expectations.

More of the same may push AUD higher as the market’s favored China liquid proxy. Risk appetite may also improve if positive data helps to cool worries over a slowing economy. That may also offer support to the pro-risk New Zealand Dollar. But, technical signals seem to point in the other direction.

The Australian Dollar struggled to confirm a break above key descending resistance from the end of 2018. Prices turned lower after failing to take out the key psychological barrier between 0.6894 and 0.6929. That has placed the focus on near-term support at 0.6862. 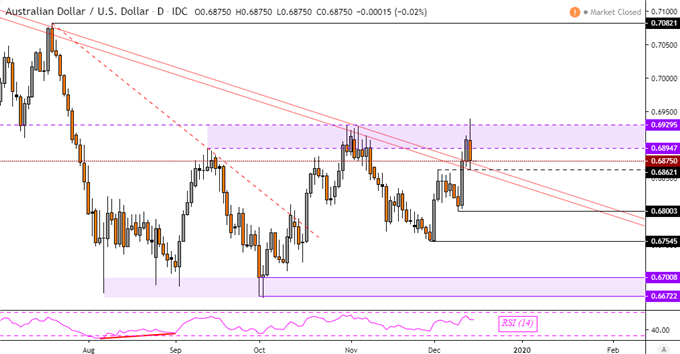 This is as the New Zealand Dollar left behind a Shooting Star candle which is a sign of indecision. NZD/USD also struggled to push above the falling trend line from March with prices sitting around support at 0.6592. A turn lower places the focus on former resistance which may act as new support at 0.6465.

Charts of the Day – NZD/USD 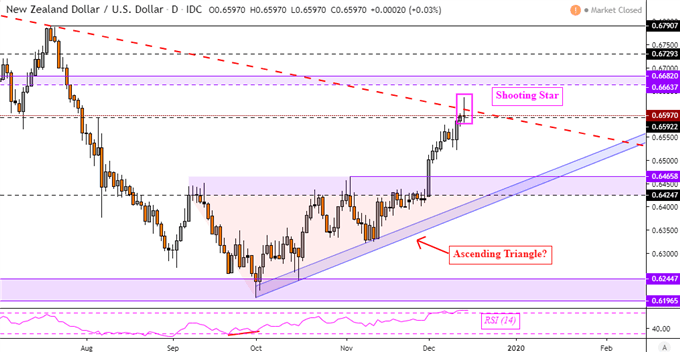 You might be interested in
What Do Other Traders' Buy/Sell Bets Say About Price Trends?
Register for Webinar
Join Now
Webinar Has Ended