Gaps Ahead in the Japanese Yen, Australian and New Zealand Dollars?

Markets are bracing for a potential deterioration in sentiment which may strengthen the anti-risk Japanese Yen. After the S&P 500 and Dow Jones closed 2.59% and 2.37% lower on Friday, US President Donald Trump delivered an announcement on Chinese tariffs. The active $250b levy will be raised to 30% from 25% on October 1. An extra $300b to come in September will be at a 15% rate instead of 10% anticipated.

His response was a countermeasure to retaliation from China, who earlier in the session announced its own set of higher tariffs against the United States. The world’s second-largest economy said that it would impose $75b in levies on US goods and then in the middle of December, resume 25% tariffs on their automakers. This refueled speculation that the Fed will step in and perhaps deliver aggressive easing in September.

The US Dollar underperformed against its major counterparts, falling alongside local government bond yields. A closely-watched segment of the yield curve inverted deeper, speaking to increasingly higher concerns that the US economy could be heading for a recession. Earlier this week, the manufacturing sector contracted for the first time since 2009. It seems political risk kept USD from catching haven bids for now.

Aside from New Zealand trade data, the focus for foreign exchange markets at the beginning of the week will likely be on risk trend. This leaves the sentiment-linked Australian and New Zealand Dollars vulnerable should Asia Pacific equities follow Wall Street lower. Deteriorating yields on government bonds may also offer a boost to anti-fiat gold prices.

Taking a closer look at USD/JPY, the currency pair’s decline on Friday left it pointing towards support at 105.05 after resistance held at 106.78. A deterioration in risk appetite may keep pressuring USD/JPY to the downside as it eyes the January “flash crash” and March 2018 lows at 104.78 and 104.57 respectively. Closing further lower opens the door to testing 103.70. 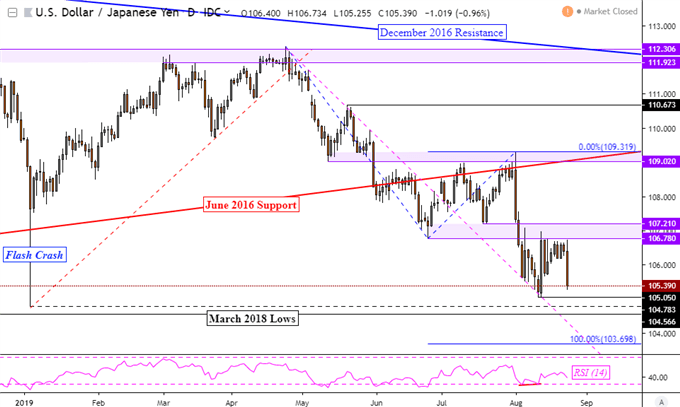