The US Dollar had a rather mixed session on Wednesday, jawboned by risk trends and the FOMC meetings minutes. European equities aimed higher, led by gains in autos as the Euro Stoxx 50 closed +0.62%. This sapped the appeal of haven-linked assets such as the Greenback and the anti-risk Japanese Yen. Then, the minutes from January’s FOMC meeting offered USD a boost, leaving it little changed by the end of the day.

Heading into the event, the markets priced out a hike by the end of this year after last month’s relatively cautious Fed rate decision. Today, the details of the document reiterated some of policymakers’ concerns. These include slowing global growth and the US-China trade war. However, there remained optimism about domestic economic conditions: a strong labor market and inflation being near their target.

Many Fed officials noted that they were unsure about what rate moves may be needed this year with some noting that further hikes could be appropriate. This may have been the cause of gains in USD as local front-end government bond yields rallied. Any signs of a possibility of a hike this year run counter to what the markets are anticipating. That alone may have caught some investors off guard.

Arguably, this is a by-product of a data-dependent approach which naturally creates uncertainty. What was more certain is that almost all Fed officials wanted to halt the runoff in the balance sheet later this year. Given that markets usually take the path of least resistance, that may have been why the S&P 500 soon pared its losses in the aftermath of the FOMC meeting minutes. This could bode well for equities.

Asia Pacific benchmark stock indexes may echo gains on Wall Street with S&P 500 futures pointing higher heading into Thursday’s session. As such, the Japanese Yen could be vulnerable to losses ahead. Meanwhile the pro-risk Australian Dollar may have a hard time climbing if a local jobs report misses expectations. After all, economic data has been tending to underperform relative to expectations in Australia as of late.

Join me as I cover the Australian Jobs Report LIVE and the reaction in AUD/USD where I will also be looking at what could be in store for the Aussie next!

In its near-term uptrend from last week, AUD/USD has formed a Doji candlestick at its most recent peak under resistance at 0.71645. This is a sign of indecision which could precede a turn lower, especially if Australia’s employment data disappoints. This would place immediate support around 0.7081 to 0.7054. You may follow me on Twitter @ddubrovskyFX for interim updates on the Australian Dollar. 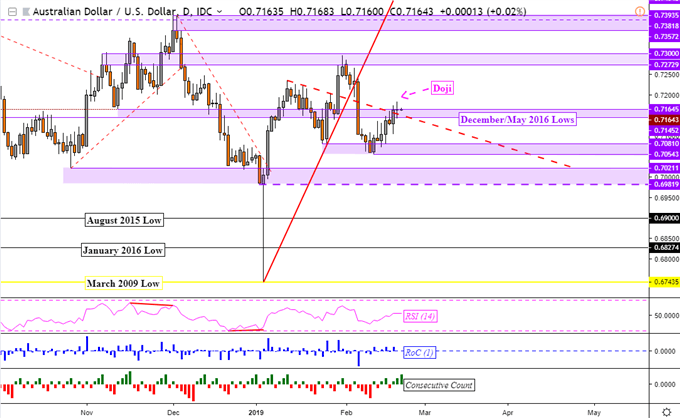 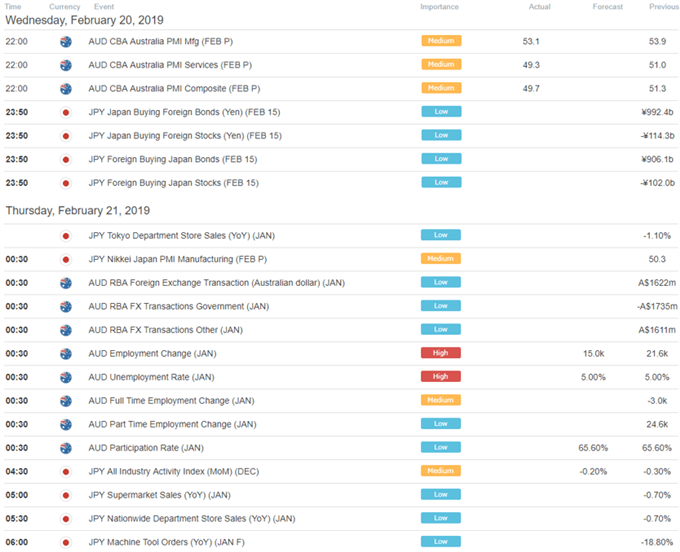