Wall Street soared for a fourth consecutive day as market-wide optimism picked up during the latter half of Monday’s trading session. The S&P 500 climbed 0.68% as it extended the near-term uptrend from late December. The confidence in investors sapped the demand for US Treasuries as prices fell.

The aggressive rise on Wall Street occurred after a slew of US economic data missed expectations. Factory and durable goods orders disappointed (see calendar below), underscoring the recent dovish turn in the Federal Reserve. Still, the US Dollar largely outperformed against its major counterparts.

This seemed to be because of gains in the greenback during the first half of the session when Nikkei 225 futures steadily traded lower. Upside performance in USD peaked afterwards when it had to contend with conflicting forces (rising stocks versus rising bond yields). The former tends to sap the appeal of USD.

Due to its lackluster performance in the first half of Monday’s session, the pro-risk Australian Dollar ended the day narrowly lower. Ahead, it will be facing the first Reserve Bank of Australia rate decision of this year. Since December’s announcement, there have been several important developments externally. Most notably are the dovish Fed and increasing fears of a global economic slowdown (especially in China).

Markets have become increasingly dovish of the RBA as a result, but their policy stance has been neutral for some time. On top of that, Governor Philip Lowe has kept the notion that they favor their next move as a hike. If the central bank still hangs on to that outlook, then Aussie Dollar may rise. On the other hand, shifting away from that bias and to something more in-line with market bets would probably hurt it.

Join me as I cover the RBA rate decision live beginning at 3:15 GMT as I go over the Australian Dollar’s reaction and what could be in store for it afterwards.

Technical analysis hints that the Australian Dollar could be heading for another rosy week. Aside from the RBA, given the rosy performance on Wall Street, Asia Pacific benchmark stock indexes may trade higher. This would further weaken the anti-risk Japanese Yen which aimed narrowly lower Monday. 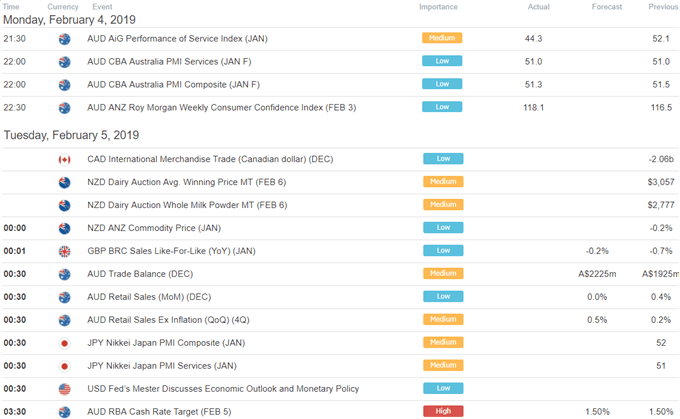