The Canadian Dollar saw relief thanks to an impressive local jobs report. Canada’s unemployment rate dropped unexpectedly to 5.6% in November which was a record low. The country also added 94.1k jobs versus just 10.0k anticipated, also a record high. Meanwhile the labor force participation rate increased to 64.4%, indicating that the country was able to absorb the extra hiring.

Lately, the Lonie has been under pressure as near-term Bank of Canada rate hike bets were pushed further out this week. This was largely as a result of a cautious BoC rate announcement and fears about falling oil prices. Front-end government bond yields rallied on Friday, signaling hawkish monetary policy expectations that are back on the table.

Speaking of crude oil, the commodity was jawboned by conflicting fundamental themes. First, the commodity rose about 5.2% on news that OPEC agreed to production cuts amounting to 1.2m barrels per day. But, gains were then trimmed in the aftermath as risk aversion continued to dominant market headlines. This resulted in oil prices narrowly avoiding a bullish price signal on the weekly chart.

Risk aversion continued to engulf Wall Street, the S&P 500 ended the day 2.33% lower and down 3.82% for the week. That was its worst performance since March as markets continued fretting about global growth concerns and US China trade tensions. The latter is begin complicated by the arrest of Huawei CFO Wanzhou Meng who now faces conspiracy charges and violating US sanctions on Iran.

In the FX spectrum, this resulted in the pro-risk Australian and New Zealand Dollars to fall behind their major peers. The US Dollar edged cautiously lower despite demand for safe havens. Fading 2019 Fed rate hike bets overshadowed the greenback as the markets looked increasingly concerned about what the next year entails. Though Fed’s Lael Brainard reiterated the case for gradual rate hikes in the ‘near term’.

While we begin this week with a slew of economic data during Monday’s Asia Pacific trading session, these items pale in comparison to the fundamental themes that have been driving risk aversion. The Australian Dollar will probably look past home loan data as it closely eyes how equities react to Wall Street’s decline. Should the rout continue, the anti-risk Japanese Yen is likely to finish higher against its major peers.

On the chart below, the US Dollar has confirmed a close under the rising support line from September. This could be a bearish signal but the pair may be entering consolidation mode. This would be the case if the horizontal range of support holds between 96.05 and 96.16. Until this area is breached, declines could be limited. 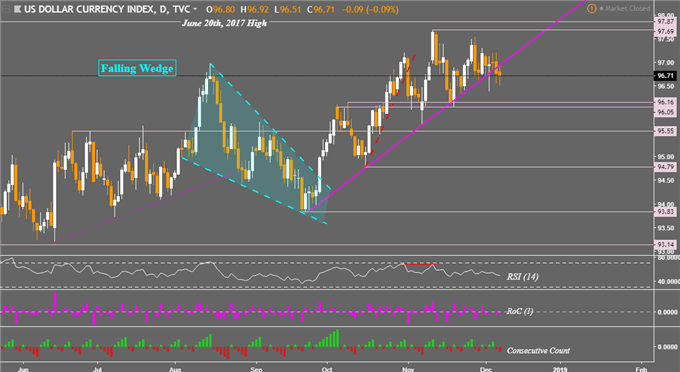 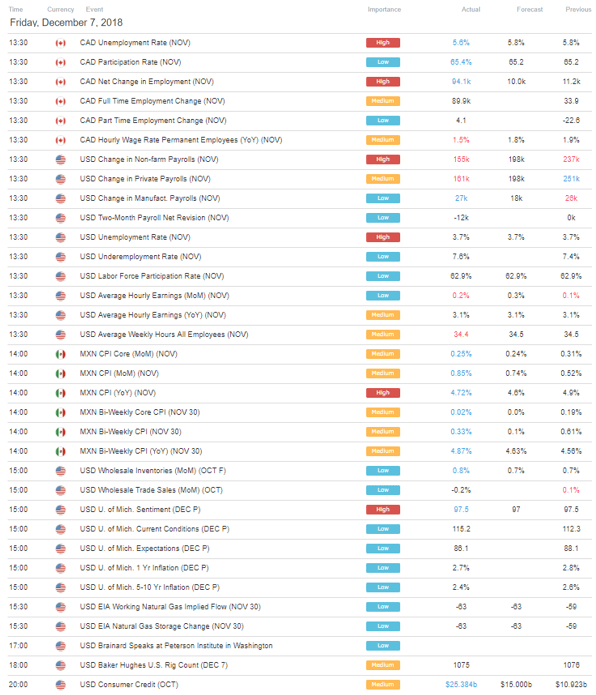 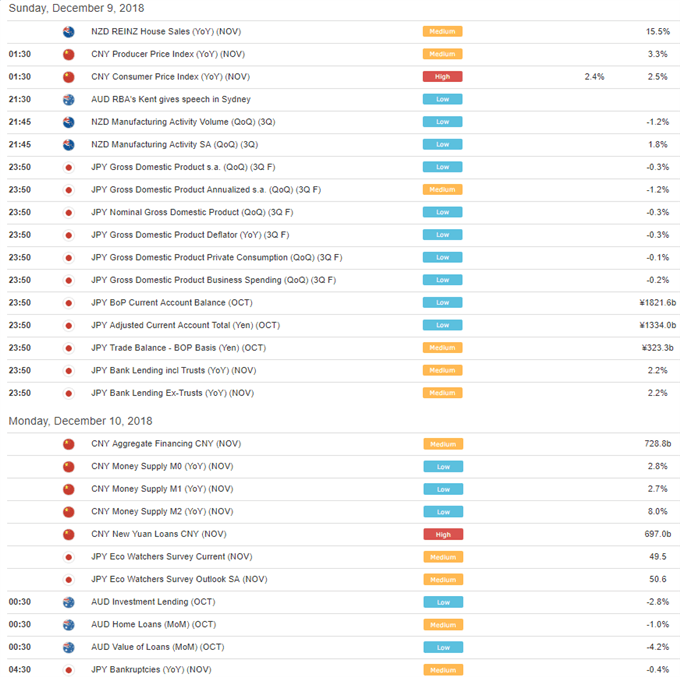