The US Dollar edged cautiously higher against most of its major counterparts on Friday, this time benefiting with an outperformance on Wall Street and an initial rise in local bond yields. The S&P 500 gained about 0.82%, finishing the week roughly 4.85% to the upside. This was its best performance over the course of one week since November 2011. It now seems to be on the verge of extending its near-term uptrend.

Broad market optimism seemed to reflect trade war relief bets ahead of the G20 Leaders’ Summit in Argentina. US Trade Representative Robert Lighthizer said that he would be ‘surprised’ if the China dinner failed. Donald Trump himself said that there were ‘good signs’ ahead of his sit-down with China’s President Xi Jinping. Though some Chinese officials said that a few disagreements existed with the US.

One currency that stood tall against all others, including USD, was the pro-risk New Zealand Dollar. Kiwi Dollar benefited from the improvement in market mood but the same could not be said for its Australian counterpart. Perhaps traders were too hesitant to take on bets in AUD/USD given the proximity of the RBA rate decision tomorrow. The Aussie also had to contend with weaker Chinese Manufacturing PMI data.

One of the worst performing major currencies was the Euro, which was undermined by a stronger US Dollar and disappointing Eurozone economic data. Not only did Eurozone CPI disappoint, but Italy’s economy shrunk by 0.1% q/q in the third quarter. The last thing that the nation needs at this point is a recession as government officials struggle working out a budget proposal with the EU.

As we head towards this week’s market open, all eyes are on how FX and stocks will react to the outcome of the G20 Leaders’ Summit that occurred over the weekend. Both US and Chinese officials spent last week signaling that a resolution or positive outcome of some sort would occur. If the US-China trade war seems to be on the verge of cooling down, it could ignite a ‘risk on’ trading session to come.

Amidst this scenario, I opted to close my NZD/USD short as prices were just under my stop at the end of last week. With that said, the bigger risk here is that all the hype and tension about a resolution would be in vain. Such an outcome would probably result in a more aggressive ‘risk off’ session to come. With that in mind, expect abnormal levels of volatility in the Australian, New Zealand and US Dollars as well as the anti-risk Japanese Yen. Especially when Asia stocks open for trading afterwards. 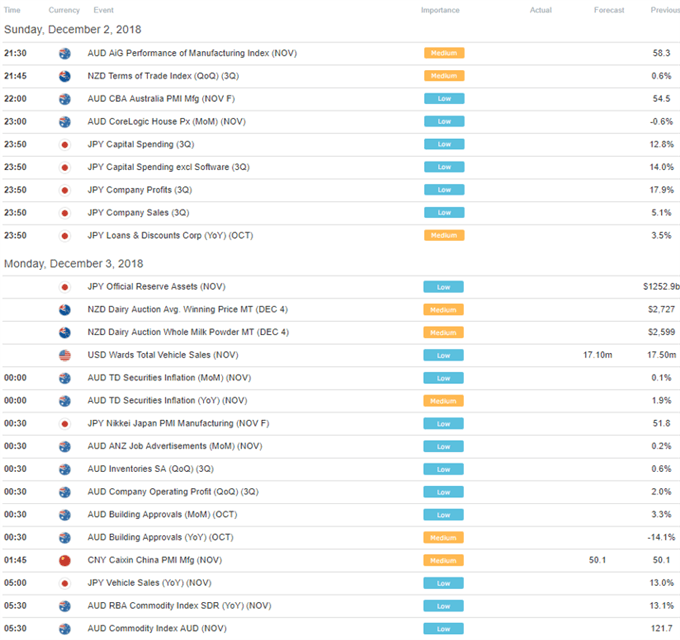