- May has produced strongest monthly performance for USD in QE era.

- Variation of returns is higher than other months; volatility is common.

For May, we continue to focus on the period of 2009 to 2014. The small sample size is not ideal, and we recognize that there is increased statistical stability with using longer time periods. However, because of the specific uniqueness of the past six years relative to any other time period in market history - the era of quantitative easing - we've elected to attempt to increase the stability of the estimates with the shorter time period. 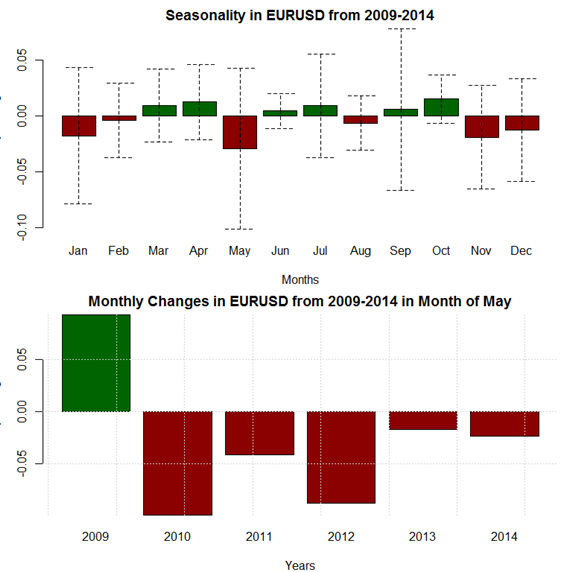 The Euro has lost ground to the US Dollar in five consecutive years, with the only positive performance during the QE era coming in 2009. Accordingly, while the dispersion of returns is fairly wide, on balance, a modest loss has materialized. EURUSD has followed its QE-era seasonal tendencies closely thus far this year; and a continuation of this pattern would see the April gains reversed by the end of the month. The caveat may be the outsized net-short Euro position held by speculators in the futures market, which started unwinding in the middle of April. 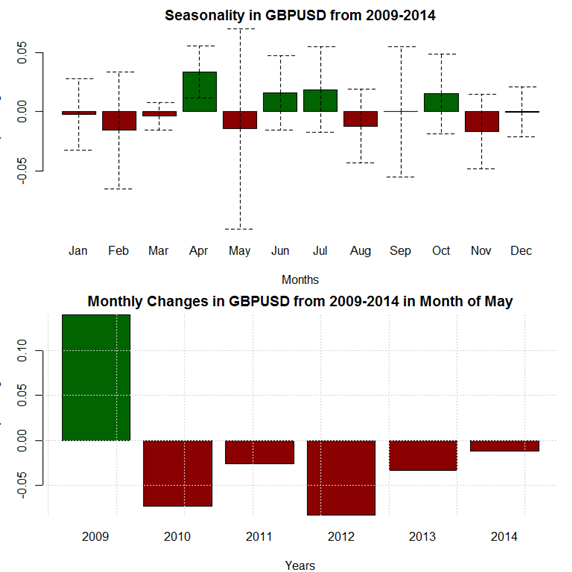 Like EURUSD, GBPUSD has seen losses materialize in each of the past five years, with the only positive performance coming in 2009. Also like EURUSD, losses have been moderate on average, but the dispersion of returns is higher than in other months of the year due to the outsized gain at the start of the QE era. The most comparable year may be 2010, when the UK general election took place; the general election takes place this year on May 7, and may prove to be the most significant driver of GBPUSD over the next several weeks. 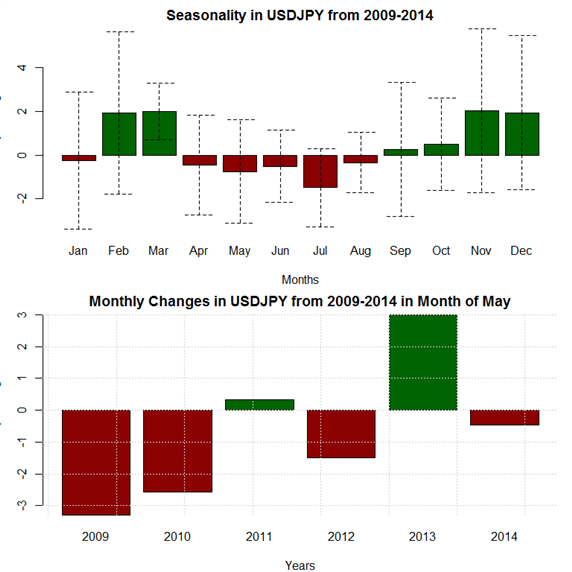 Our seasonal forecast for USDJPY in May is neutral, if not slightly negative. The average performance calls for lower prices, although gains and losses have alternated since 2011; the average performance is dragged down by significant losses in 2009 and 2010. USDJPY is in the midst of its “bearish” stretch of the year, which has lasted from April to August during the QE era. 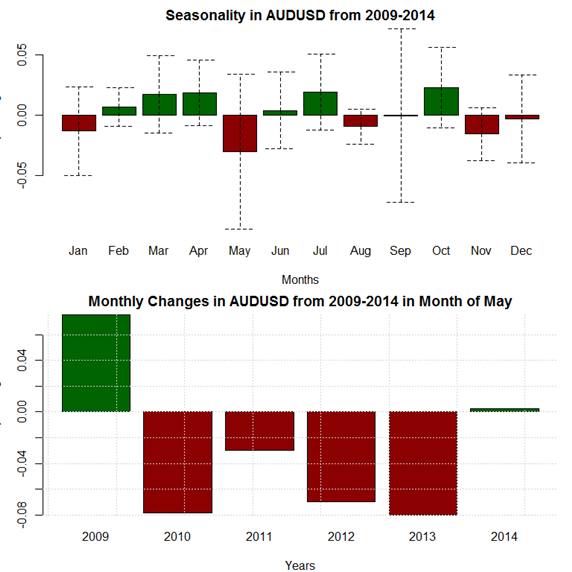 May has been the worst month of the year for Australian Dollar during the QE era, bar none. Last year was an outlier, with a slight gain; but the preceding four years produced significant losses. Discounting the broad-based US Dollar weakness seen in 2009, May has typically marked itself as the epicenter for AUDUSD weakness during the year. 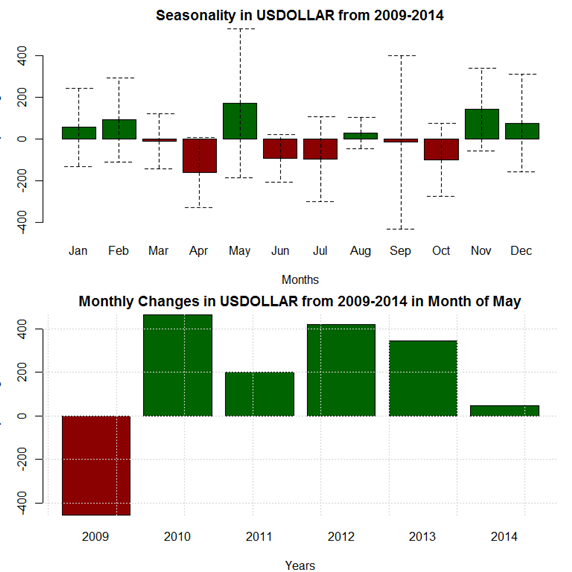 May has been the best month of the year for the USDOLLAR Index (an aggregate of EURUSD, GBPUSD, AUDUSD, and USDJPY). 2009 produced the only loss during the QE era, leading to the wide range of outcomes. However, gains have been consistent in each of the past five years, although the lowest positive return developed last year. The caveat to an outright bullish forecast is the unwind going in the net-long US Dollar position in the futures market, following the best ten-month stretch for the greenback in market history. 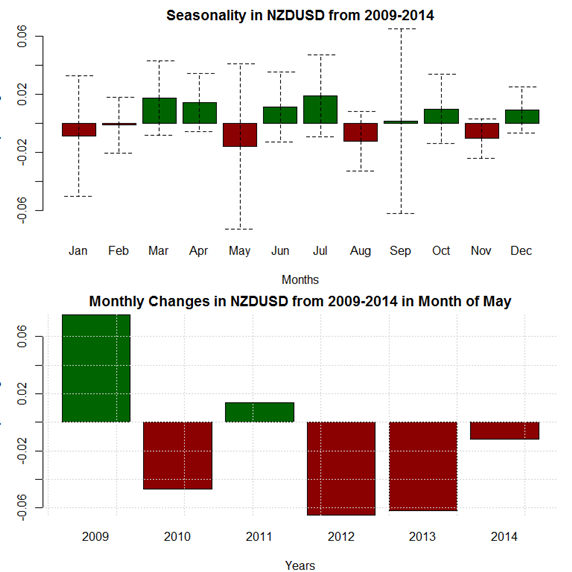 May has consistently a poor month for the New Zealand Dollar during the QE era, with losses coming in four of the past five years. Last year’s performance was only slightly negative, and thanks to an outsized gain in 2009, the dispersion of returns is high. Considering that there has been no consistency in the magnitude of losses, it’s safe to suggest that volatility may be a hallmark of NZDUSD trading over the course of the month. 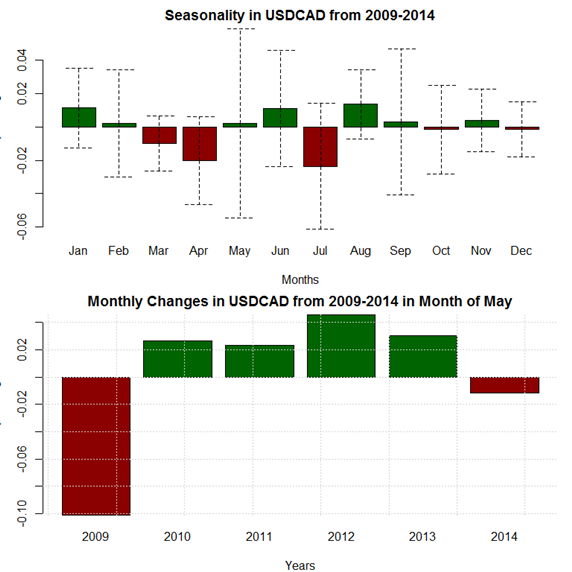 All things considered, May is a neutral month for the Canadian Dollar. Although the seasonal tendency has been for a very slight gain in USDCAD, the QE era May performances are bookended by a significant loss in 2009 and a slightly loss in 2014. If the US Dollar continues its positioning unwind, the Canadian Dollar appears to be among the best-suited to outperform. 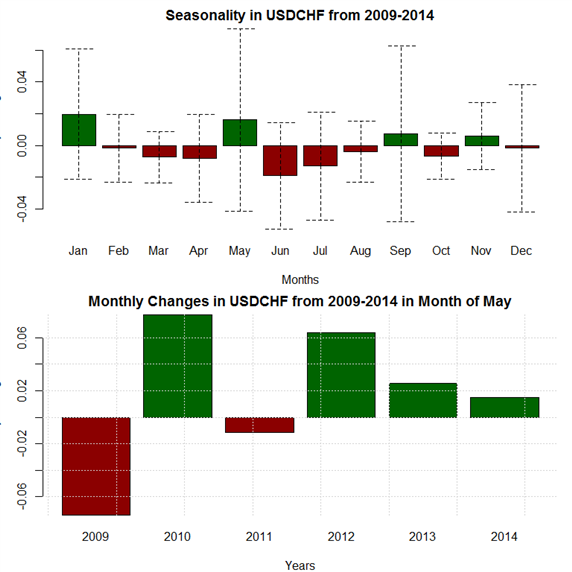 Like the other major USD pairs, USDCHF has seen a wide range in terms of outcomes over the past six years. Although gains have materialized in each of the past three years, the magnitude of positivity has decreased through present day. While May has on average produced the second best return during the year for USDCHF, a more neutral forecast may be deemed appropriate. 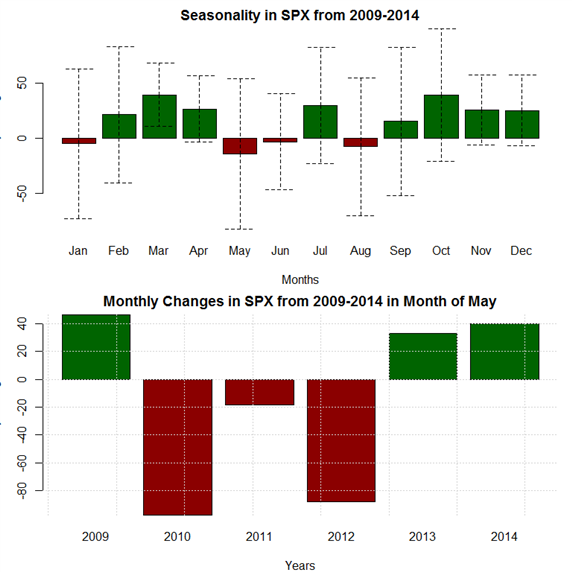 ‘Sell in May and go away?’ That may have been an appropriate axiom from 2010 to 2012, but investors living by that principle have been disappointed in each of the past two years. The average May performance has been on balance negative during the QE era (culminating in the worst month of the year for US equity markets); and like the USD-pairs, dispersion of returns has been high. Fundamental factors influencing markets this May are diverse: the Fed continuing its low rate policy, although it’s looking to raise rates at some point this year; corporate earnings have improved in recent years, but the slowdown in the US economy in Q1’15 has dampened consumer potential; and the return of inflationary pressures in a weak global demand environment has recently increased investor anxiety in recent weeks. 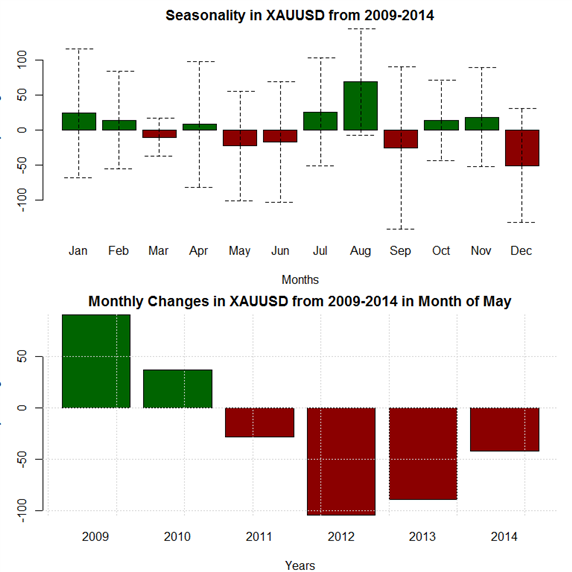 As would be expected in a month when the US Dollar typically outperforms, Gold, a USD-denominated asset, has typically seen losses materialize in May during the QE era. Losses have developed in each of the past four year, albeit at a decreasing rate since 2012; and the only positive performances came in 2009 and 2010, as the Fed’s expansive QE programs were flooding the market with liquidity. It might be best to keep an eye on US yields; rising yields would buoy the US Dollar, decreasing the need for Gold as an inflation hedge or hedge against fiat dilution.