- February has been a bullish month for the USDOLLAR Index four of the past six years.

- The Japanese Yen typically has suffered in February during the QE era.

For February, we continue to focus on the period of 2009 to 2014. The small sample size is not ideal, and we recognize that there is increased statistical stability with using longer time periods. However, because of the specific uniqueness of the past six years relative to any other time period in market history – the era of quantitative easing – we’ve elected to attempt to increase the stability of the estimates with the shorter time period. 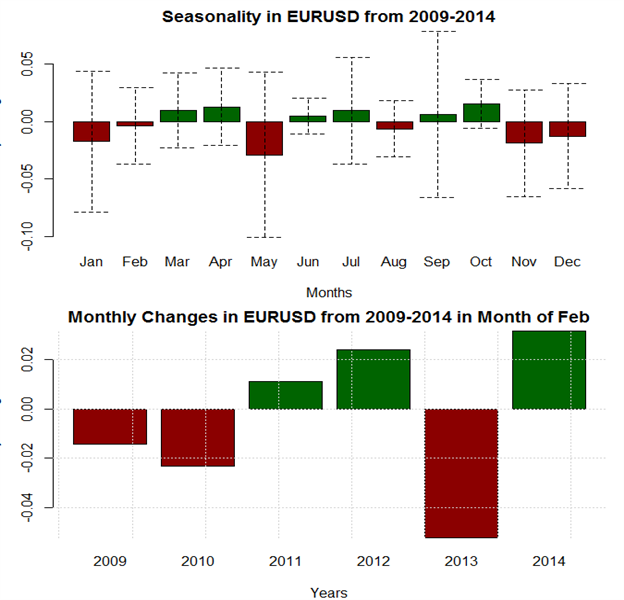 Euro seasonality is decidedly mixed for February, even though the average move over the past six years has been for a small loss. That being said, February’s loss represents the weakest down performance of any month of the year; and three of the past four years have produced gains in EURUSD. Given outsized short Euro speculative positioning in the futures market, any whiff of good news out of the Euro-Zone could help provoke a swift short covering rally. 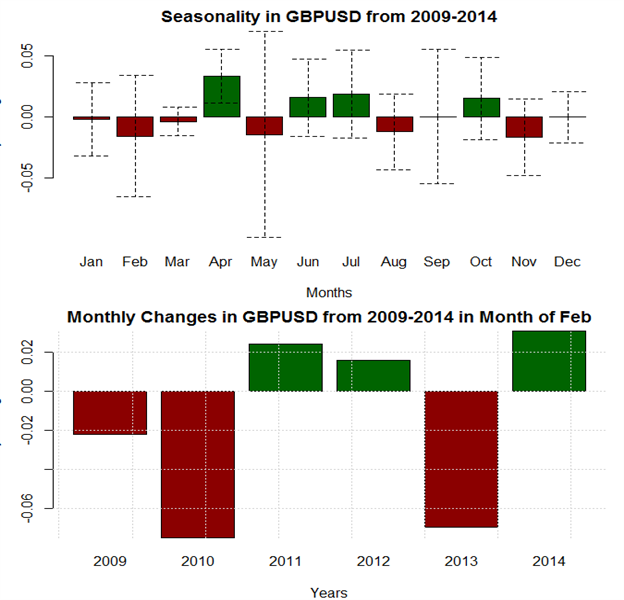 The British Pound has typically struggled in February the past few years, although the breakdown isn’t straightforward. Gains have been just as prevalent as losses the past six years, but the February seasonal tendency is negative as the losses have been greater than the gains (see: 2010 and 2013). It’s more likely that the British Pound takes its cues from the Euro’s general direction. 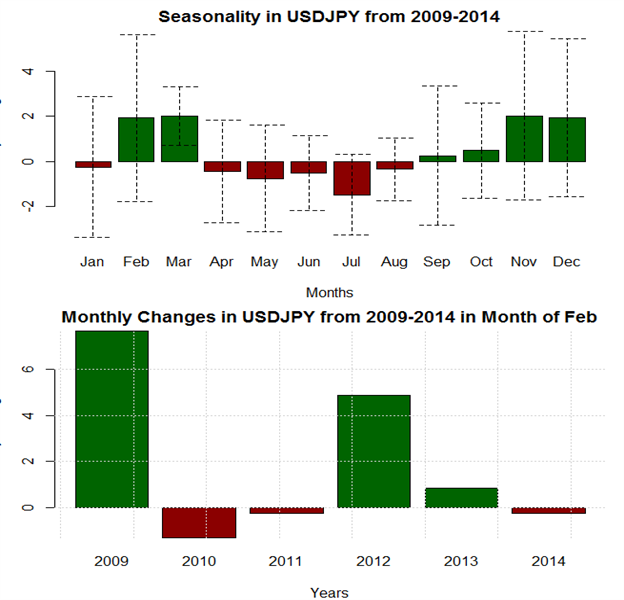 We’re in the midst of the best stretch of the year for USDJPY, and if QE era seasonal patterns are accurate, it should be smooth sailing until March. February has been the second strongest month of the year for USDJPY, but the average is misleading: two outsized gains in 2009 and 2012 contribute to this skew. It seems that February is an ‘all-or-nothing’ month for USDJPY; if the last two years are any indication, it could be a quieter month. 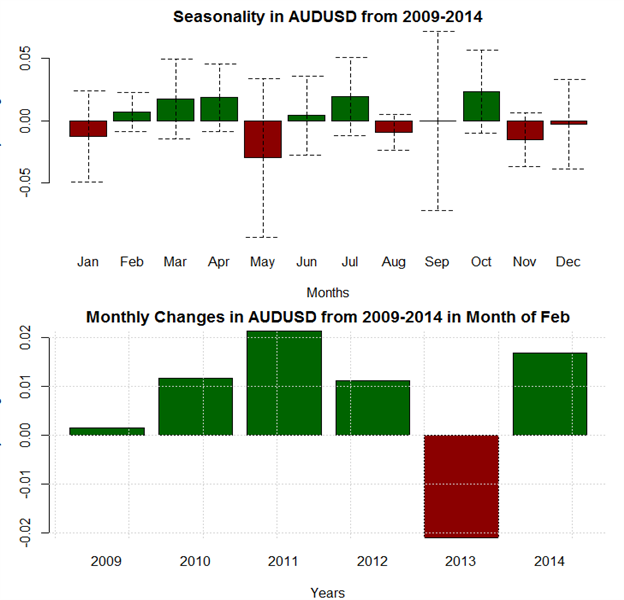 The seasonally bearish stretch of the year for AUDUSD is over (November-January), and February has typically marked the beginning of a bullish run (February-March). From 2009-2014, February has only produced mild gains, however (second-weakest bullish month of the year), so even if AUDUSD has a bullish tendency, it will likely be at the behest of broader risk trends. 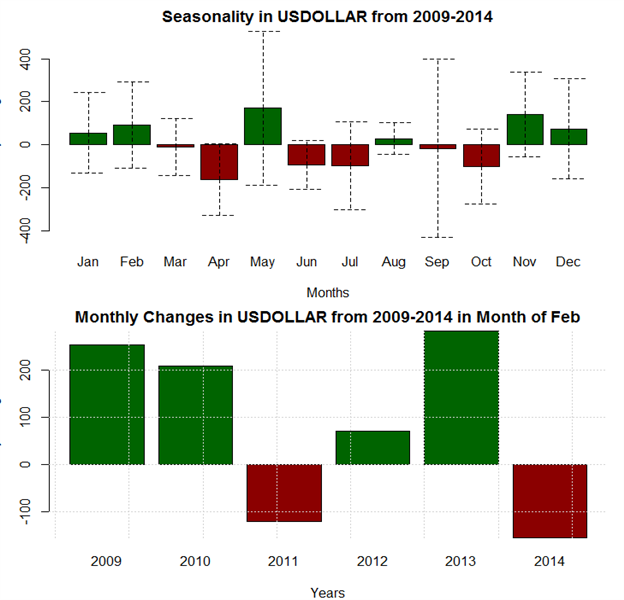 In the QE era (which is now over in the United States, in full-swing in Japan, and on the verge of being unleashed in the Euro-Zone), February has proven only to be a mildly bullish month for the US Dollar – although it has been the third-strongest overall, thanks to a one-off outperformance of USDJPY in 2012. February caps what is a four-month stretch of seasonal gains (November-February), and gains have accumulated in four of the past six years (although not in 2014). That being said, the deck is stacked against the buck: speculative futures positioning is abating from an all-time high. If the seven-month bull trend stalls, we could see a quick rush to the exits in US Dollar longs and a repeat performance of February 2014. 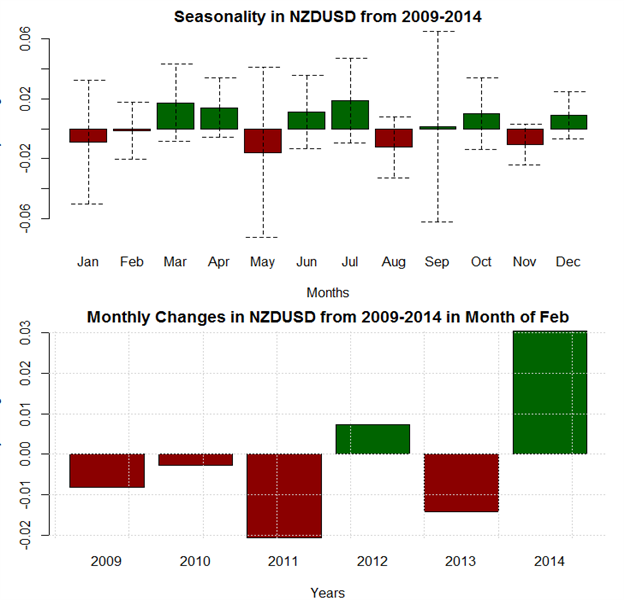 Seasonal patterns haven’t been all that clear for the NZDUSD over the past six years. Notably, no periods of gains or losses has exceeded more than two months of consistency. Losses have developed in four of the past six Februaries, with gains coming in the past two of three, and a particularly large gain in 2014. Our seasonal outlook here is neutral. 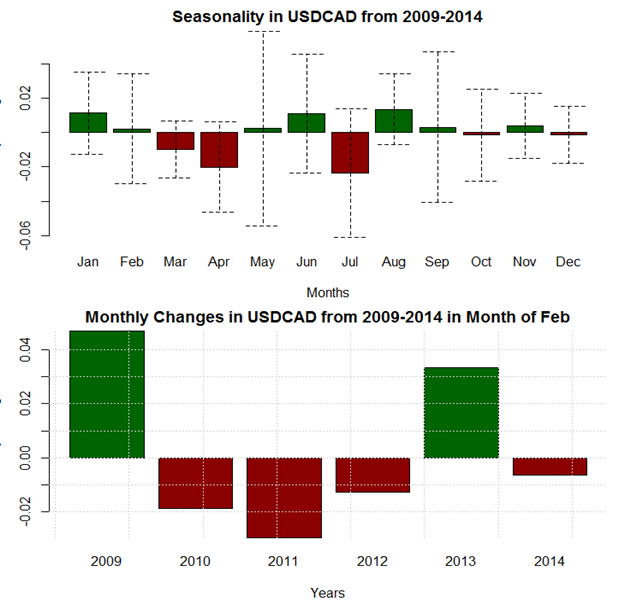 USDCAD hasn’t found much direction in February, although gains tend to be large and losses tend to be relatively smaller. That being said, even though USDCAD’s tendency has been to rally, it is worth noting that the average trading range in February is greater than the preceeding four months. USDCAD volatility tends to tightenup in the early months of the year, while the warrmer months (May-September) have typically brought about larger ranges. 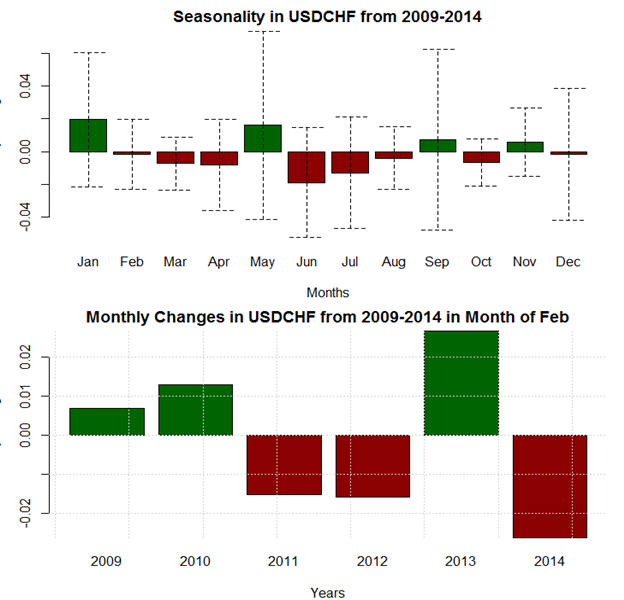 Seasonality is slightly bearish for USDCHF in February, although if recent history is a guide, it could be more negative than the average performance of the past six years. Three of the past four years have produced losses, and in light of the capital dislocation after the SNB’s decision to remove the EURCHF floor in January, traders should expect greater variance than history suggests. 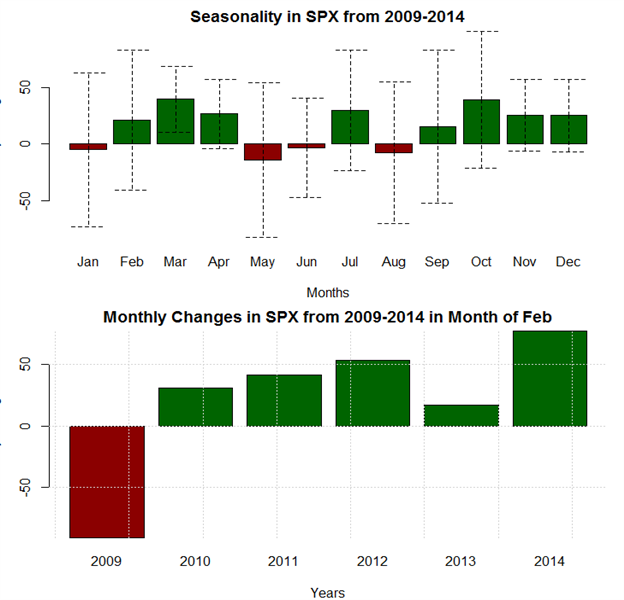 Do seasonal patterns really matter in the S&P 500? Equity markets have essentially done nothing but go up since early-2009. Nevertheless, if the pattern holds, then February should be a strong month for stocks, if not accompanied by volatility (variance in returns is higher in February than any other bullish month in the first half of the year). If anything, traders may wait for March and April – which have been flush with gains since 2009. 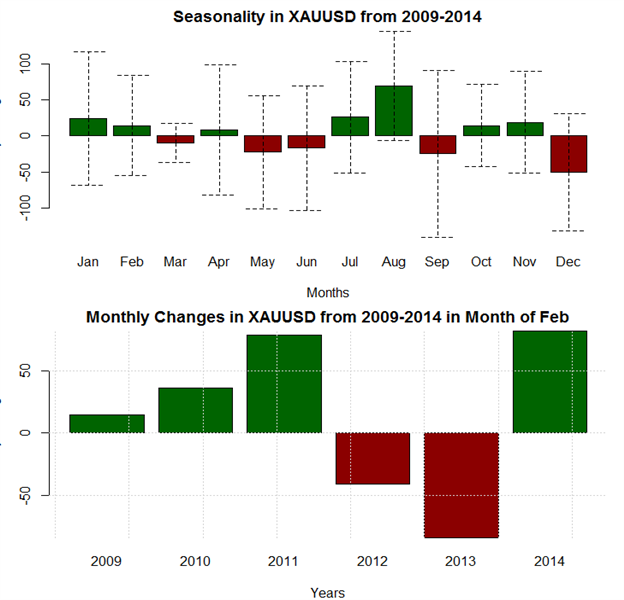 Precious metals were berated in 2014, but 2015 has been off to a stronger start. Although the average gain in February for Gold has been smaller in February than that in January, the average trading range has been narrower. Considering that March has been a negative month in the QE era, a lagged performance in February could be indicative of a rough end to Q1.