The Australian Dollar was little changed in response to the RBA meeting minutes that were released today for the September conclave.

The bank cited concerns of global growth prospects going forward but noted that current economic indicators were fairly robust in most parts of the developed world, including Australia.

Lockdowns in China remain a hindrance for supply chains and expensive energy prices are hampering many parts of the world.

On Friday, in an appearance before a parliamentary committee, RBA Governor Philip Lowe reiterated his opinion that as rates become elevated, the case for further large boosts decreases.

He stated that the RBA will be considering a hike of either 25 or 50 bp at their next meeting on 4th October. The tightening of monetary policy is to calm a rising tide of inflation. The last read of year-on-year CPI to the end of the second quarter came in at 6.1%.

The US Federal Reserve is meeting on Wednesday and is anticipated to raise rates by 75 basis points (bp) according to a Bloomberg survey of economists. There has been speculation of a 100 bp tightening but the market has this priced as only a slim possibility.

This rate disparity may put AUD/USD under pressure, particularly if forward guidance from the Fed is more hawkish than they have already been.

AUD/JPY on the other hand is eyeing off 7-year highs as the Bank of Japan is expected to maintain very loose monetary policy at its meeting this Thursday.

Earlier today, Japanese CPI data came in slightly stronger than anticipated. Year-on-year headline inflation was 3.0% to the end of August instead of the 2.9% forecast.

The RBA’s September meeting minutes can be read in full here.

AUD/USD continues to languish near 2-year lows. It remains within a descending trend channel after testing the topside of it last week and it may continue to offer resistance, currently intersecting at 0.6810.

The 21-day Simple Moving Average (SMA) coincides with that level at the moment, potentially adding more weight to it.

After failing to break above the descending trend line, a Bearish Engulfing Candlestick formation was created. At the same time, the price moved below all short, medium and long term SMAs and all SMAs are displaying a negative gradient. This may suggest that bearish momentum could continue to evolve.

The break point of 0.6670 appears to be shaping up as crucial level of support having been tested on Friday and again on Monday. A clean move below that level may further confirm bearish momentum, while it could provide a base for bulls if it continues to hold. 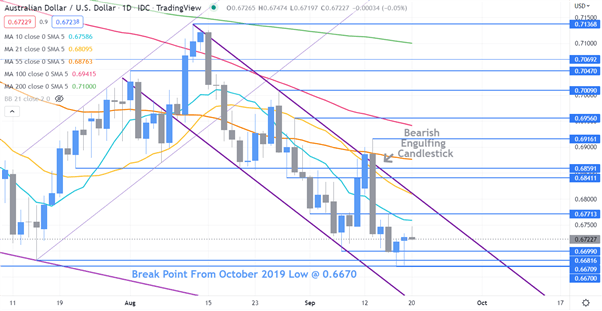