When forecasters get a prediction right, critics often chalk it up to little more than coincidence. But let’s give it a go: 2022 will bring the end of cryptocurrency as we know it.

Begin with bitcoin. Its price can’t increase forever, but it’s had a parabolic rise since the end of 2018. (See “End in sight?” below.)

As bitcoin ascends the final slope of its three-year bull market, one of two things must happen: Its price must fall off the parabola or melt up to its ultimate peak. Either way, that’s bad. As a result, we can expect a bear market in 2022.

What about ethereum and the thousands of other cryptocurrencies that aren’t bitcoin? During the last bear market in 2018, every altcoin declined more than 90% from its peak. Some plummeted 99%, and a handful went to $0. While the technology has improved and the best altcoins actually do something other than “go up,” every altcoin has problems—even the biggest ones. Ethereum can’t scale and costs too much for small users. ETH 2.0 keeps getting delayed and nobody knows if it will work as expected. 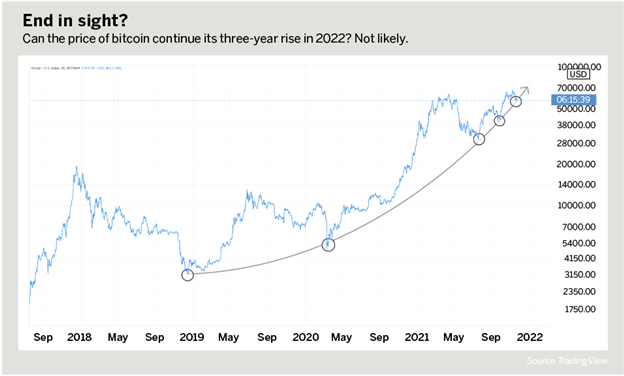 Binance, a cryptocurrency exchange company, is a walking magnet for FUD (fear, uncertainty and doubt). Cardano, a public blockchain platform, doesn’t work. The leader of EOS, an entrepreneurial operating system for businesses, bailed on the project after raising $4 billion in an unregistered securities offering. The cryptocurrency DOGE has an unlimited supply. SushiSwap, a decentralized exchange that operates as an automated market maker, started as a scam. Early investors in Internet Computer (ICP), which facilitates smart contracts, dumped their tokens on innocent newcomers at the peak of the last altseason, that brief period when money flows out of bitcoin into altcoins. Thorchain, a protocol that offers cross-chain liquidity, has suffered at least three hacks, but at least it works—unlike most projects.

Don’t expect any of those early-stage, experimental technologies with uncertain product-market fits and novel structures to hold up in a bear market. At least bitcoin has users and proven technology, and lots of people have a stake in its success. Most altcoins have none of that.

Once the hype dies down, 2022 will bring a collapse in altcoin prices. Many will drop 99% or more from their high. Most will never recover. The only question is how high they will go before they fall.

The bear market of 2022 will end cryptocurrency’s stint as the Wild West of finance. Already, global financial regulators are probing stablecoins, the privately issued cryptocurrencies pegged to the U.S. dollar and other major currencies. They regard stablecoins as digital versions of the wildcat banks of the Old West. With both, customers have had to trust a private company instead of the full faith and credit of the U.S. government to back their dollars.

At least one stablecoin likely doesn’t appear to have enough money in reserve to pay out everybody who asks to redeem their tokens. Perhaps all of them fall short.

When the bear market arrives, investors will find out who’s swimming naked. Some will go to jail, and others will pay huge fines. Even crypto die-hards will realize governments should regulate who can create and distribute digital dollars.

That’s why society will probably turn over control of crypto to Wall Street and big banks.

U.S. regulators have already begun to create a framework that banks can use to put bitcoin in their reserves, and U.S.-based companies are working on crypto-based financial products. Other countries have gone even further. Derivatives will boom as speculators take out short positions and institutions choose to keep bitcoin off their books. With the proliferation of futures, exchange-traded funds and other derivatives for bitcoin and some large altcoins, big buyers and sellers can already move in and out of the market without pumping or crashing prices. As more money flows to paper-traded investment products instead of the spot market, it’ll take a lot more enthusiasm to pump the crypto market again.

The longer it takes for bitcoin’s price to go back up, the less fun it will be. Investors will get bored the way they did during each of bitcoin’s three previous bear markets. But something has changed. Now, investors have ways of gaining exposure to bitcoin without actually buying it. Plenty of people will continue to accumulate bitcoin, but the 13-year speculative phase of crypto will end, and a new phase will begin.

What will that phase look like? That’s a subject for 2023 predictions. Suffice it to say that builders will keep building, developers will keep innovating and some platforms will adapt, persist and bloom.The technology will evolve while the price bleeds for months, as it did in each of the three previous bear markets.

Frankly, that may be the best thing for bitcoin. It can finally prove it has value beyond just going up in price.

Mark Helfman,crypto analyst at Hacker Noon, edits and publishes the Crypto Is Easy newsletter at cryptoiseasy.substack.com. He is the author of Bitcoin or Bust: Wall Street’s Entry Into Cryptocurrency. @mkhelfman