Financial markets are worried about on-coming inflation, and with seemingly good reason. The US has already spent close to 25 percent of pre-pandemic (2019) GDP on stimulus and aims to do keeps the largesse coming. Later this week, President Biden is set to propose a hefty infrastructure buildout with a price tag in the trillions. A slew of other initiatives were touted on the campaign trail.

This coupled with the unleashing of pent-up demand sidelined by Covid-19 closures as vaccination ramps up as well as a central bank aiming to give price growth some runway above the target 2 percent before stepping in to pull back stimulus have understandably out traders on notice. The 5-year breakeven rate – a measure of priced-in inflation expectations implied in bond markets – is at the highest since mid-2008.

Policymakers have shrugged off inflation concerns for now, suggesting that any near-term pickup in price pressures is likely to be transitory, fading away as the skew from Covid-related disruptions is rebased out of calculations in the coming months. There is some logic to this thinking: even the 2008 global financial crisis and its big-splash stimulus response registered as only a blip in the long term disinflationary trend. 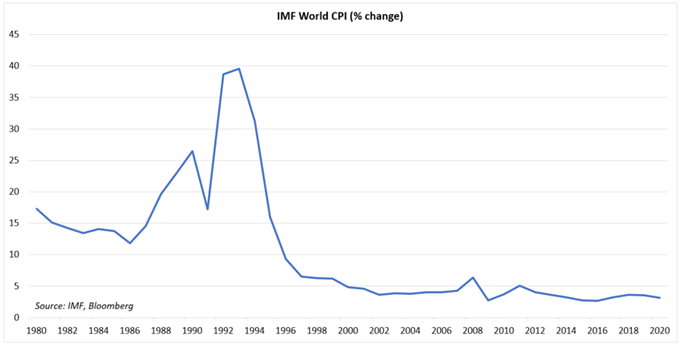 Nevertheless, this time may be different. First, the Covid crisis triggered a far larger policy response on the fiscal side. Second, while the size of monetary stimulus this time and in the aftermath of the 2008 blow-up are analogous at about $3.5 trillion in the US, it has been delivered in barely a year in 2020 versus close to 7 years previously. A built-in demand surge from economic reopening was also absent last time.

The markets seem taken-enough with the possibility of rapid reflation to build out bets that the Federal Reserve will mind its mandate and speed up the pace of tightening, despite recent protestation. The US Dollar has notably perked up while gold prices have dropped inversely of a surge in Treasury bond yields, suggesting investors are repricing for a less dovish path forward than previously anticipated.

An eye-catching consequence of this adjustment has been a rotation out of the tech-heavy Nasdaq 100 stock index – where companies are far more sensitive to rising borrowing costs – and into the cash-rich blue chip names in the Dow Jones Industrial Average. More of the same may be in the cards if the Fed is indeed forced to ratchet back support ahead of schedule, especially if its current reticence forces subsequent catch-up. 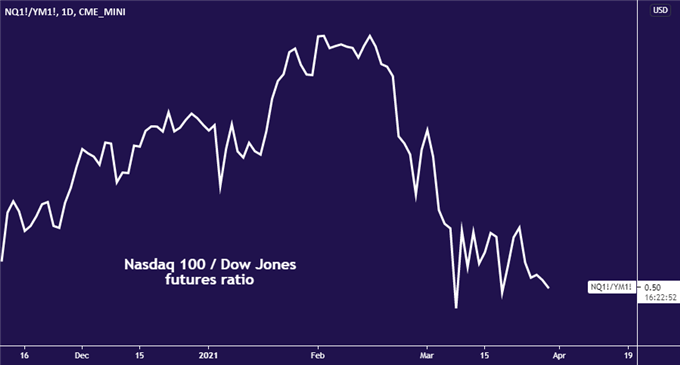