On Thursday, the 4Q'20 US GDP report will be released. A Bloomberg News survey is calling for US GDP to come in at +4% annualized in 4Q’20 after surging by a record +33.4% in 3Q’20. Depending upon where you look, estimates vary significantly. The New York Nowcast estimate for 4Q’20 GDP is at +2.58%, while the Atlanta Fed GDPNow model is pointing to loftier+7.5% growth.

But the fact of the matter is that Bloomberg consensus forecasts and the regional Fed bank forecasts have been coming down for the past several weeks, reflecting a deceleration in US growth as the coronavirus pandemic entered its darkest days. Even though the next tranche of US fiscal stimulus was agreed upon at the end of the Trump presidency, it is still possible that 1Q’21 US GDP comes out in negative territory (but we won’t find that out until April). 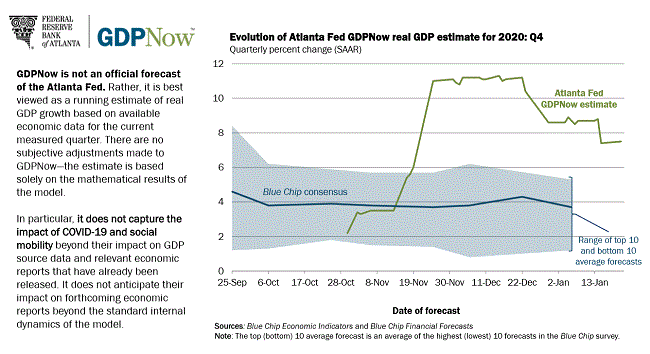 Rising US initial jobless claims, weakening ISM and PMI surveys, and disappointing consumption figures all point to a US economy that has decelerated in recent months. No surprise, this deceleration has mirrored the sharp rise in coronavirus infections, hospitalizations, and deaths.

But the prospect of another $1.9 trillion in US fiscal stimulus pushed by US President Joe Biden, now that Democrats have full control of Congress, has helped put a floor under falling growth expectations. If policymakers on Capitol Hill are able to get another tranche of stimulus passed in February, then additional government rescue funds could help the US economy avoid a double-dip recession in 1Q’21.

The January Fed policy meeting set to conclude on January 27 is the first of the Biden presidency. Beyond that, who cares? After much ado about a potential tapering of its QE program, Fed officials took to the airwaves in mid-January to hush a potential taper tantrum. The first meeting of the year, without a new Summary of Economic Projections, may offer little by way of tangible policy shifts to provoke volatility. 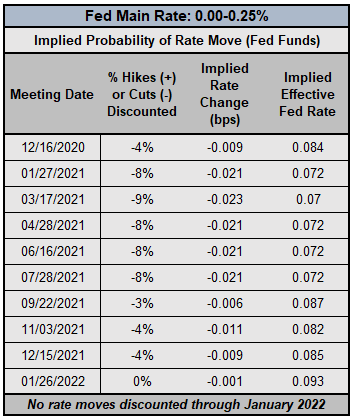 The Fed has pushed back against rising expectations of a more hawkish central bank, tamping down taper tantrum concerns with a bevy of speeches in mid-January. As long as Fed Chair Jerome Powell is at the helm, the FOMC will stay the course, with the intent of keeping interest rates low through 2023. Fed funds futures are pricing in a 100% chance of no change in Fed rates through January 2022. As such, traders may see the January Fed meeting come and go with much ado about nothing. 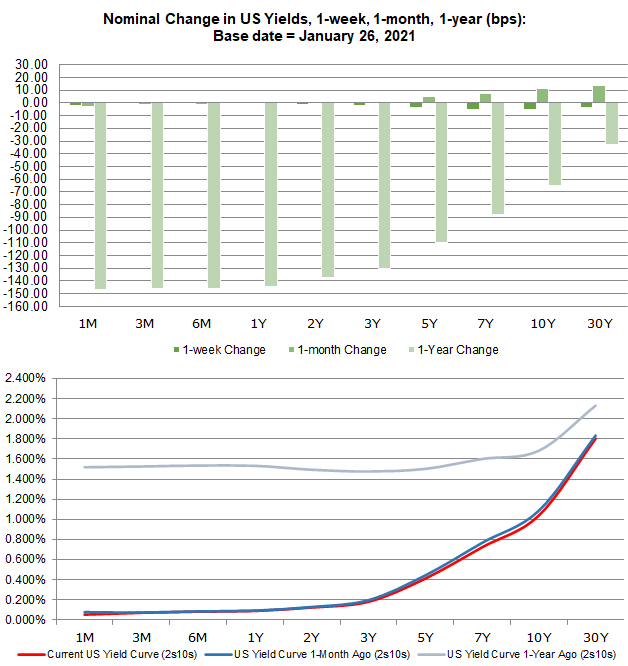 The Fed’s efforts to flood the market with liquidity have depressed short-end yields, helping keep intact an artificially steep of the US yield curve. Eroding US economic data momentum alongside alarming COVID-19 data would suggest that the near-term growth environment is not as certain as the US Treasury yield curve would suggest. We’re still of the belief that the combination of a steeper US yield curve and a US Dollar failing to rally is a fundamental red flag. 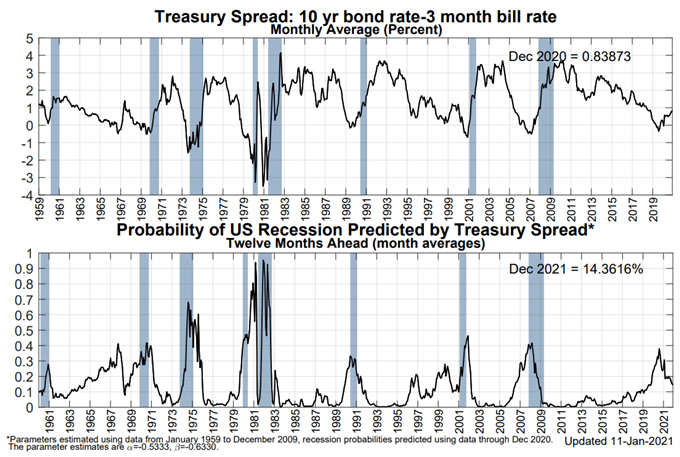 In aggregate, there is currently a 14.4% chance of a US recession in the next 12-months, per the NY Fed Recession Probability Indicator. Recall that this tracker never eclipsed 40% during the spring, even as 2Q’20 GDP was, quite literally, the worst quarter in US economic activity. Once more, the US yield curve is hiding the truth, masking what will likely be more weakness at the end of 4Q’20 and into early-1Q’21.