The British Pound may be in for a rough week as EU and UK negotiators buckle down for intensified talks as the December 31 expiration date of the transition period nears. As I’ve written about in July, the dispute over economically-strategic and politically-sensitive fishing grounds continues to be a major wedge widening the rift between Brussels and London.

UK policymakers warned that the gap on fisheries with their European counterparts risks being “impossible to bridge”. EU chief negotiator Michel Barnier later pointed out that “persistent and series divergences” are characterizing Brexit talks. With so much still to resolve, UK Prime Minister Boris Johnson and President of the European Commission Ursula con der Leyen agreed to extend the talks by a month.

Despite growing risks of a no-deal Brexit, the Prime Minister said that the country can “prosper mightily under those circumstances” despite growing risks of supply chain disruptions. Last week, the government warned that a lack of preparation in the case of a no-deal scenario could result in “100km” lines of trucks. Under the strain of the coronavirus pandemic, this would only amplify the economic costs.

Recommended by Dimitri Zabelin
Why do interest rates matter for currencies?
Get My Guide

Talks are set to resume this week in London and will then continue next week in Brussels. The EU has stressed the need for a resolution either by the end of October or early November, so enough time is left for the bloc to ratify an agreement. Until then, the British Pound may become increasingly more sensitive to Brexit developments as the clock ticks.

This week we will also be seeing the first vice presidential debate between VP Mike Pence and Joe Biden’s running mate Kamala Harris. The event will take place on October 7 at the University of Utah in the Kingsbury Hall on President’s Circle. The debate will start at 9:00 PM E.T. and will end at 10:30 PM E.T. with no commercial breaks.

Following the first presidential debate, the non-partisan Commission on Presidential Debates (CPD) has announced intentions to alter some aspects of the debate. One of the measures includes potentially cutting the microphone off if candidates persistently interrupt each other. The event will be worth looking out for in terms of policy, although it is unclear how much of an impact the debate will have on financial markets.

One major risk continues to be the health of President Donald Trump as he fights off a coronavirus infection. Shortly after his diagnosis was announced, a slew of contradicting information regarding his health crossed the wires and left investors confused and uncertain. Mr. Trump’s physician said he was doing “very well”, and then shortly after an unnamed source said the President was not on a clear path to recovery.

Later, Trump himself said “I think I’ll be back soon”, with the doctor saying later saying he may be discharged as early as Monday. The key takeaway here is the uncertainty of the situation in an already fundamentally-fragile environment puts growth-anchored assets like equities, AUD and NZD at risk of potentially short-term but aggressive selling bouts.

The anti-risk Japanese Yen and haven-linked US Dollar may also experience price oscillations, though on the other side of the coin – that is, buyers swooping in. Having said that, if Mr. Trump’s illness negatively impacts his ability to get re-elected, it could bolster market mood. It is possible that, given Mr. Trump’s penchant for unconventional approaches to trade and foreign policy, the prospect of another four years in kind would sour risk appetite.

The S&P 500 index appears to be stuck again between support at 3282.3 and resistance at 3393.5 as traders decide how to allocate capital amid the political volatility. Breaking above the ceiling with follow-through may signal revived risk appetite and a degree of comfort in resuming the prior uptrend. In that scenario, a key test of confidence will be the previous all-time swing-high at 3588.1. 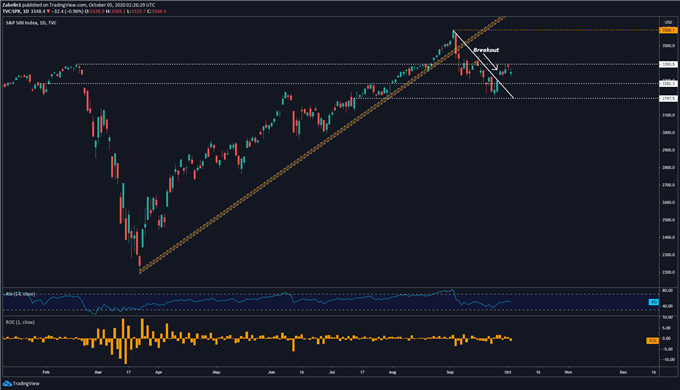 The International Monetary Fund (IMF) will be releasing the analytical chapters of its well-known World Economic Outlook, with one key area of focus being on the impact of the so-called “Great Lockdown”. The organization’s chief economist Gita Gopinath coined the term in early March. For fundamental traders, these reports provide key insights on the global growth outlook and risks to look out for in the future.