US-China Trade Talks Stall – What Does That Mean For Financial Markets?

US and Chinese officials were supposed to hold high-level trade talks over the weekend until the negotiations were rescheduled. Market participants and policymakers alike had been anxiously waiting for both sides to meet as a myriad of concerns continue to widen the cross-continental rift. These include divergent approaches to Hong Kong, Taiwan, trade agreements and more.

The latter was likely going to be the main topic ahead of the six-month check-in, following the ratification of the “Phase 1” trade agreement in February. China has not been able to make good on its pledge to purchase $200b worth of US goods on top of 2017 levels. This has been in large part due to the coronavirus pandemic wreaking havoc on the global economy and undermining domestic demand.

Concern about Beijing’s national security law in Hong Kong and the special administrative region’s autonomy has also led to a tit-for-tat exchange of sanctions against Chinese and US officials. The theme of security has also popped up in other topics, most notably around technology. President Donald Trump issued executive orders two weeks ago that prohibit financial transactions by US-based individuals on China-based social platforms TikTok and WehChat.

See more details of this from my prior report.

Secretary of State Mike Pompeo later added in an interview that these security measures against the aforementioned apps may be broader. What this exactly means is unclear, but the main takeaway is that technological friction between the two superpowers may continue to grow. This may in turn make reconciliation that much more difficult, especially ahead of the US Presidential election.

Signs of friction may therefore trim gains in cycle-sensitive assets like the Australian and New Zealand Dollars along with growth-anchored commodities like crude oil. The former two currencies in particular are susceptible to oscillations in cross-Pacific relations since they are strongly influenced by the health of China’s economy.

Taiwan recently agreed to purchase almost 70 of the newly-designed F-16 fighter jets from industrial giant Lockheed Martin Corp. Part of the reason why this is making headlines is because it marks the first sale of these advanced aerial vehicles to the island since 1992. The move is widely speculated to anger China, though it is unclear how Beijing will respond. This uncertainty may help push the US Dollar higher.

EU and UK officials will be meeting this week to ”continue to plug the gaps” in bilateral trade relations that still remain unresolved. Contentious issues like fisheries are contributing to the deadlock. Officials have repeatedly blamed each counterparty for the source of friction. A lack of progress could make GBP traders nervous and cause selling pressure to swell.

GBP/JPY may retest the resilience of the July uptrend after failing to top the early-June swing-high at 139.744 (gold-dotted line). That rejection could signal an underlying lack of confidence in the pair clearing that level – at least in the short term. Political uncertainty may for now be a factor capping GBP/JPY’s gains. If the pair invalidates the uptrend with follow-through, it could lead to a broader corrective pullback. 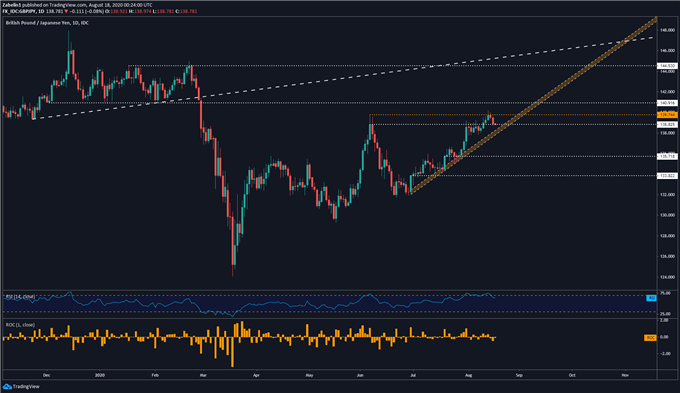