The Indian Rupee was unable to find much of a lift despite the Reserve Bank of India (RBI) unexpectedly leaving benchmark lending rates unchanged in August. The local 2-year government bond yield traded higher, touching its highest since the middle of June. Meanwhile, India’s benchmark Nifty 50 stock index traded higher ahead of a rosy Wall Street session.

The RBI repurchase and reverse repo rates held steady at 4.00% and 3.35% respectively. Economists were fairly split over whether or not the central bank could deliver further 25 basis point cuts. The possibility of near term inflation expectations may have been why the RBI hesitated to reduce borrowing costs. Governor Shaktikanta Das noted that there are inflation pressures evident across sub-groups.

Inflation is anticipated to stay elevated until September before easing, and hopes for further stimulus down the road may have kept the Nifty afloat. In addition, the RBI gave the green light for banks to restructure debt for certain borrowers. It allows them to extend moratoriums on loan repayments for up to two years. An additional special liquidity facility of INR100 billion was planned for NABARD and NHB, key banks.

Compared to some of its counterparts, the Indian Rupee hasn’t been able to find as much meaningful upside progress against the US Dollar as of late. This is as Asia’s third-largest economy remains the third most-impacted nation by the coronavirus outbreak. Indian fiscal-2021 real GDP growth is expected to be negative for the first time in over 40 years. From here, USD/INR is eyeing local industrial production and CPI data next week while also keeping a tab on external risks that may influence market mood.

USD/INR remains in range-bound trade since prices found a low in June. That point also very closely aligns with the 2018 high at 74.48. Key resistance sits above as a range between 75.37 and 75.52. In the middle, there is the 74.94 – 75.07 inflection range which has its beginnings from April. A daily close under the 2018 high could open the door to resuming the top from April. 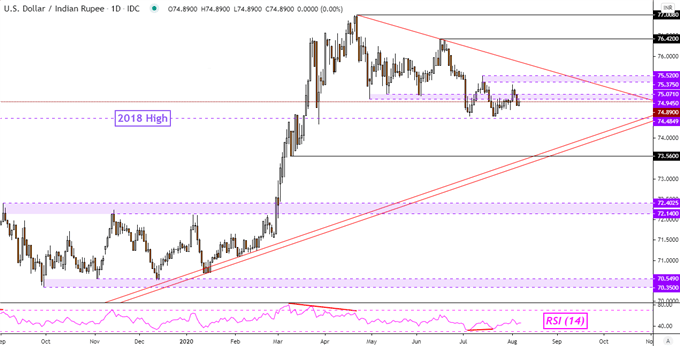 The Nifty 50 remains in an uptrend after prices were unable to push under rising support from March’s bottom. In fact, the index may be on the verge of retesting a key resistance zone between 11317 and 11433 which could invalidate the Bearish Harami candlestick pattern. Otherwise, a daily close under the rising trend line could open the door to a reversal, exposing support at 10553. 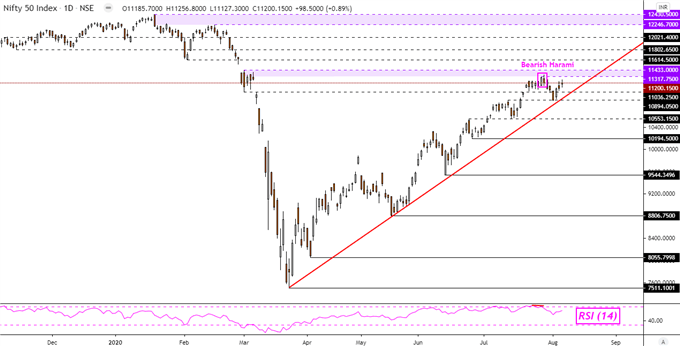