US Recession Fears Rising Rapidly, In a Sense

It’s been several months since our last update on US recession odds, in part due to the fact that this strategist was on paternity leave for the birth of his first child. But now that I’m back at the desk fulltime, a high-level look at the state of the US economy is necessary.

To this end, the global and US economies are in a very different place than they were at the end of January; equity markets continued to chug higher, thanks in part to the relief that the US-China trade deal brought to investors. One global pandemic and nearly three months later, it now appears that the global economy is in the worst position since the Great Depression, and it could be worse.

US Economic Data Turning Down, Trackers are Stale

US economic data being released over the past few weeks still does not begin to capture the effects of the economic slowdown that took root in the second half of March. As a result, the Federal Reserve’s individual branches’ GDP forecast models are lagging in producing accurate results regarding the coronavirus pandemic’s impact on the US economy. 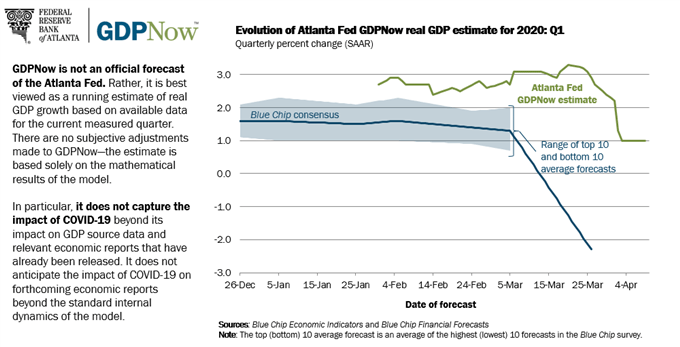 As it stands, Q1’20 US GDP expectations have slid rapidly, from their high at 3.2% in mid-March to 1.3% where they stand today. But the Blue Chip consensus forecast is calling for a much steeper decline in growth, already at -2.3%. Still, the data seem stale. Banks and economic forecasting institutes otherwise have been predicting that, while Q1’20 may seem bad, Q2’20 will be much worse: annualized GDP is estimated to contract in the neighborhood of -20% to -30%.

With the Federal Reserve already having enacted emergency interest rate cut measures, rate markets are more or less stuck in a state of suspended animation. If the Fed is going to do anything from here on out, it’s going to come via more QE, a repo facility, etc. 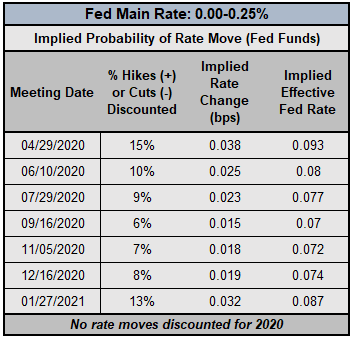 There’s been no indication that the Fed plans on moving rates into negative territory, and as a result, we’ve reached the lower bound for the time being. To this end, any suggestions by rates markets that a rate hike is coming anytime soon is a pricing quirk to be ignored.

The US Treasury yield curve has started to normalize. The relatively faster rise by long-end yields compared to short-end yields may be seen as a sign that market participants believe that the worst period of uncertainty around the coronavirus pandemic and its influence on the US economy is behind us; the yield curve is no longer inverted at the short-end of the curve (the 1-month bill yield was greater than all but for the 30-year bond yield). 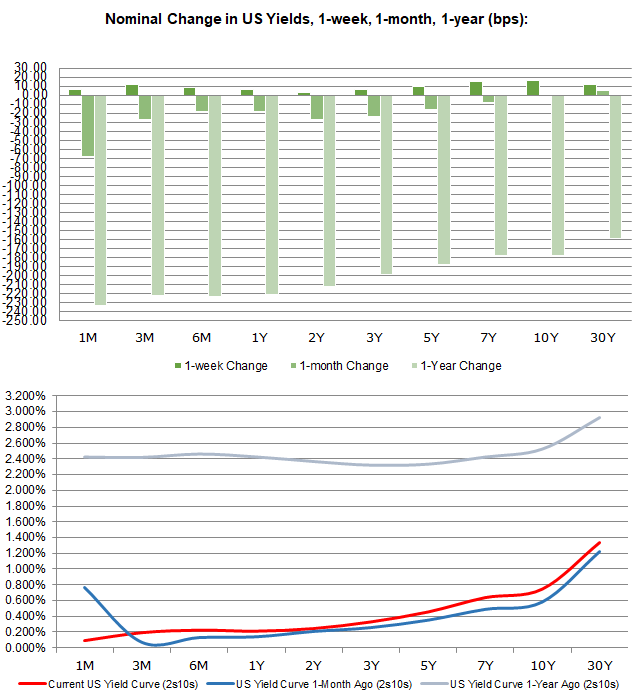 Still, it appears that the US will fall into recession soon; long-end yields are viewed as a proxy for growth and inflation expectations, and they remain significantly depressed from where they stood a few months ago, nevermind a year ago. 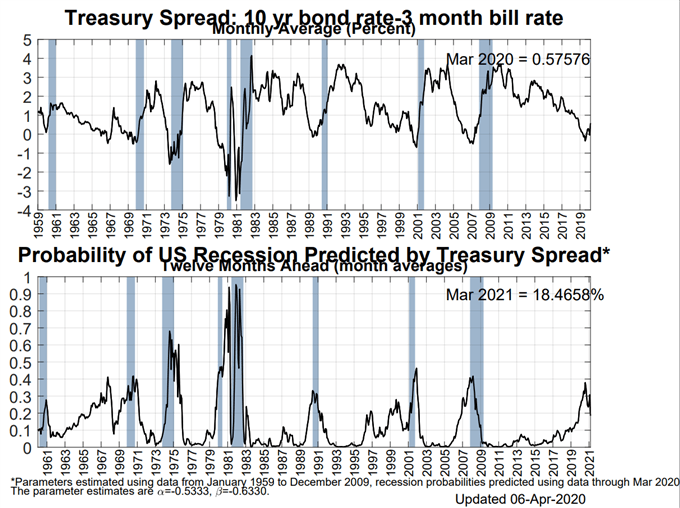 US recession odds remain artificially low, according to the relationship provided by the Treasury spreads. Efforts by the Federal Reserve to buoy risk appetite have alleviated short-term fears, in a sense that the 1-month bill yield is now the lowest on the curve (as it should be in normal circumstances). To this end, there is currently an 18% chance of a US recession in the next 12-months, per the NY Fed Recession Probability Indicator; a conclusion we know to be sorely wrong.

Conclusions about US Yield Curve Normalization and US Recession Odds

The coronavirus pandemic and the destruction its wrought, both in economic and human life terms, has materially altered the state of affairs over the past three months (no kidding). It’s important to place some of the recent economic data in context. The scope and scale of US jobs losses over the past two weeks (per initial claims data) rivals that during 1929 to 1933 during the Great Depression (adjusting for the sizes of the US population and labor force).

There are decades when nothing happens; and there are weeks when decades happen. We’re living in the latter times.