The Euro will be closely scrutinizing another round of talks between Eurozone finance ministers this week after the prior meeting failed to achieve anything of substance. The ongoing deliberations reflect an internal conflict that has been a source of tension for over a decade. Specifically, between the Northern, fiscally conservative states – like Germany – and their more liberal counterparts – the Mediterranean members.

Southern European countries are pushing for measures like the so-called corona-bonds which would involve jointly-issued debt. This risk-mutualizing measure would allow comparatively-more distressed economies easier access to funding via credit markets. This would lower the risk premium on their debt since it would also be backed by economic giants like Germany and France.

In light of the coronavirus crisis, Brussels has even allowed member states to spend beyond their legally-mandated deficit boundaries as a way to combat the virus. However, major economic players like Germany prefer lending capital to its distressed members bordering the Mediterranean with conditions attached. These could include austerity measures similar to the ones Greece agreed to during the Eurozone debt crisis.

An alternative measure German Finance Minister Olaf Scholz proposed was allowing member states to tap the credit lines of the Emergency Stability Mechanism’s (ESM) 400 billion fund without having to meet all of the strict criteria that is typically required. However, Italian Eurosceptics have expressed concern that agreeing to these terms could erode the country’s sovereignty since it would be handing fiscal oversight to an institution outside of its own borders. For Southern member states, this is a particularly bitter fruit to swallow.

However, policymakers do not have the luxury of time as the Eurozone economy faces the prospect of a deep recession. With interest rates already at ultra-low levels and the ECB implementing a 750-billion-euro bond-buying program until year-end, ratifying a growth-stimulating fiscal agreement is that much more important. Last week’s PMI figures reinforce the dark outlook and underscore the severity of the situation:

“The four largest nations covered by the survey all registered record declines in activity, with Italy and Spain experiencing the sharpest reductions. The considerable fall in activity was closely linked to a similar sized deterioration of incoming new work as government measures designed to limit the spread of COVID-19 weighed heavily on demand and economic activity” – IHS Markit. 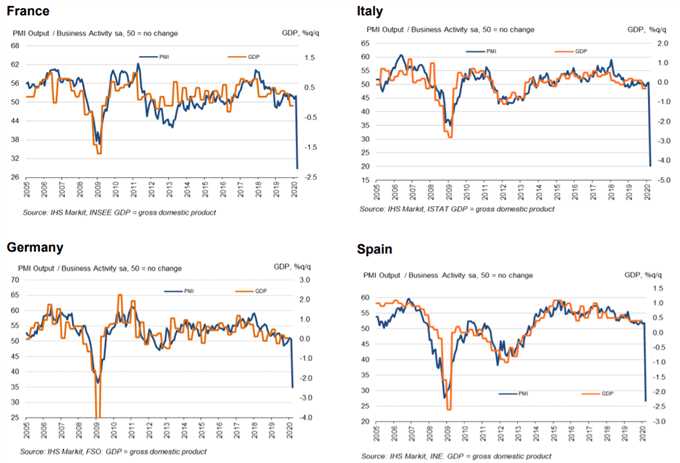 In additional to deteriorating sentiment and downgrades to the global growth outlook, crude oil prices will be fixated on the upcoming Organization of Petroleum Exporting Countries (OPEC) meeting on April 9. Since April 2, crude oil prices have rallied almost 40 percent on optimism about the prospect of a truce between Russia and Saudi Arabia following their fallout at the OPEC meeting in Vienna on March 6.

On Friday Russian President Vladimir Putin and Energy Minister Alexander Novak said producers should combine efforts to reduce output and urged all cartel members to participate. Mr. Putin added that a reduction of 10 million barrels per day could be possible. However, optimism from these comments was short-lived after a new rift was torn between Riyadh and Moscow.

Officials from both sides have been pointing figures at each other trying to absolve themselves of blame for the plunge in crude oil prices. Brent could slump further if the meeting on April 9 fails to deliver meaningful policy going forward as the coronavirus continues to weigh on global demand. US President Donald Trump attempted to broker a deal, but for now it seems that only bilateral talks will yield something of substance.