The Japanese Yen has thrived against the backdrop of slowing global economic growth since early 2018. When times are good, investors borrow cheaply in the perennially low-yielding currency to finance bets on riskier assets offering higher returns. When the outlook sours however, the de-risking of portfolios translates into the unwinding of these de-facto short Yen positions, sending the currency upward.

The US Dollar enjoyed a boost as well, albeit for different reasons. The undisputed global reserve currency offers the most robust liquidity of any of its counterparts, making by extension the least volatile when large capital flows pour in and out. That makes it understandably attractive as investors try to avoid erratic price moves while cashing out of riskier assets in an economic downturn. 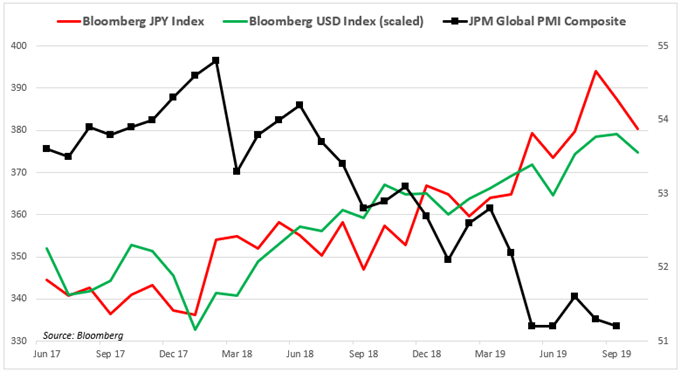 The Australian and New Zealand Dollars are at the opposite end of the spectrum. Both have suffered amid the downturn as traders found pronounced vulnerability in the outsized gearing toward commodity exports in their home economies. The central role of the US-China trade war in the current malaise hasn’t helped: the East Asian giant is pivotal cross-border sales destination for both. 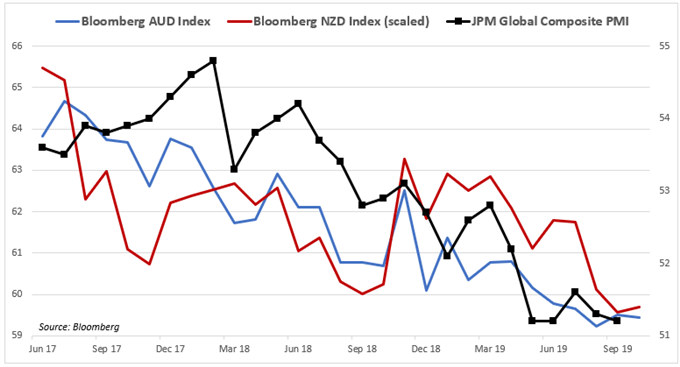 This helps explain how currency markets may respond to the upcoming Fed monetary policy announcement. The US central bank is widely expected to issue another interest rate cut. Indeed, markets price in the probability of one at over 96 percent. That means the move itself is unlikely to generate much in the way of volatility: if the outcome is priced in already, there is no need for assets to readjust to it.

That puts the spotlight on the statement accompanying the rate decision as well as the subsequent press conference with Fed Chair Jerome Powell. Thus far, markets seem to be unimpressed with officials’ easing efforts. If the guidance on offer falls short of the accommodative stance that traders would prefer – a tall order considering the already ultra-dovish tilt in priced-in expectations – sentiment might sour.

In this scenario, the broadly defensive mood across financial markets seems likely to boost the Yen, extending its nearly two-year rise. The Greenback might gain too, despite the downshift in baseline yields on USD-denominated assets. Meanwhile, the lion’s share of selling pressure might continue to be be borne by commodity-linked currencies.