The Federal Reserve is slated to deliver its latest monetary policy update Wednesday at 18:00 GMT. Markets widely anticipate the FOMC to cut its benchmark interest rate by 0.25% as central banks around the world loosen financial conditions. Dovish action by the Fed and other central banks have primarily sought to combat signs of economic weakness and sustain the current expansion in light of staggering risks that stem largely from the US-China trade war and rising geopolitical instability.

On that note, the July Fed meeting revealed the FOMC’s first interest rate cut in over a decade. The move came subsequent to a dramatic shift in the Federal Reserve’s language and forward guidance compared to this time last year. In fact, the median estimate for the 2019 federal funds rate (FFR) was previously listed as 3.1% according to the September 2018 economic projections provided by Fed members, while the most recent forecast provided this past June sees the FFR at 2.4%. Yet, the current target federal funds rate range sits at 2.00-2.25%.

IS THE FED ENTERING A CYCLE OF INTEREST RATE CUTS?

Correspondingly, with inflation continuing to run below the Fed’s target amid fermenting recession fears induced by the recent US Treasury yield curve inversion, the central bank will likely press onward by lowering borrowing costs in hopes of incentivizing consumption and business investment. That said, another Fed rate cut could suggest the scale is tipping away from a “mid-cycle adjustment” in lieu of a full-blown series of accommodative policy measures. Alas, in a sequel to our original analysis on stock market returns when the Fed cuts rates, the tables and graphs below detail how various assets like gold, crude oil, the S&P 500 and US Dollar have historically performed when the Fed enters a cycle of interest rate cuts. 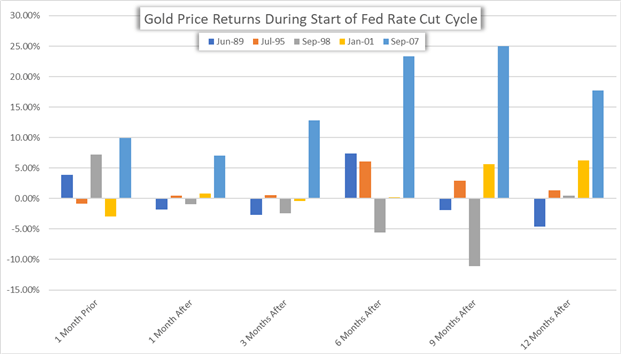 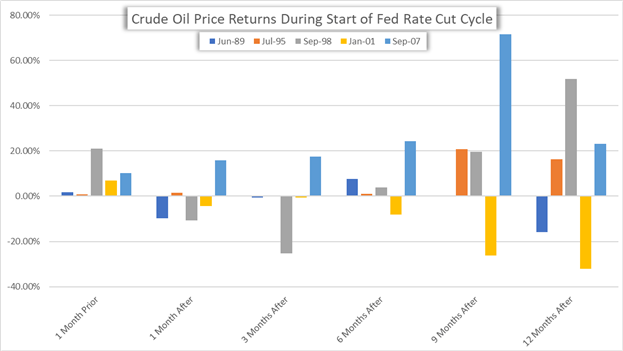 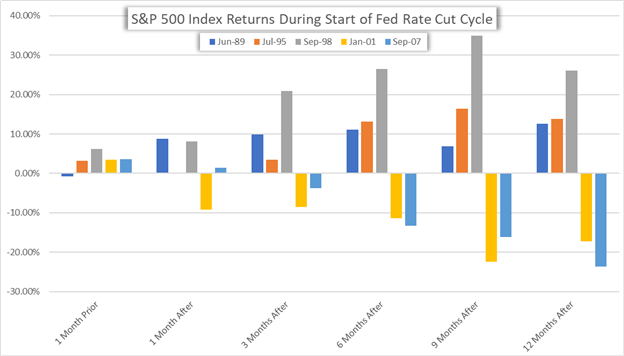 DXY US DOLLAR INDEX RETURNS WHEN THE FED CUTS RATES 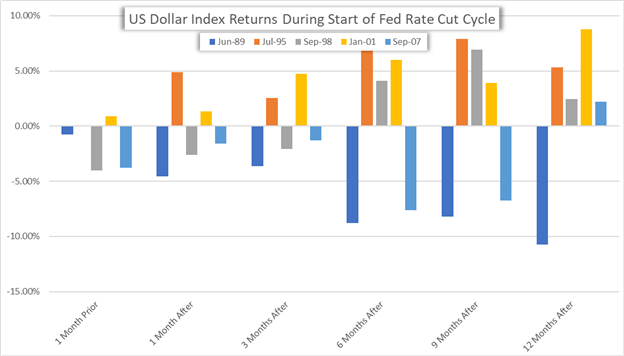