75 Years Later, The Lessons of Bretton Woods Have Been Forgotten

75 years ago this July, policymakers from around the world gathered in a quaint New Hampshire town called Bretton Woods. With the global economy at a nadir thanks to the devastating impact of World War II, policymakers were keen to take advantage of the crisis, a significant turning point in human history: a new framework could be developed that would prevent another conflict on the scale of World War I or World War II from ever taking place again.

Given the state of affairs for the global economy, particularly the rise of protectionism vis-à-vis tariffs, it’s a good time to remember why the Bretton Woods system was agreed upon in the first place, and why the lessons of the two World Wars may have been forgotten. In turn, the consequences for the US Dollar and the global economy over the next several years could be extremely destructive.

Bretton Woods Has its Roots in the World Wars

World War I saw a significant collapse in international trade as budding trade liberalization came to a sudden halt. Major stock exchanges across the world shuttered starting in 1914. As wartime trade protection measures are unwound as the Great War ends in November 1918, the League of Nations comes into existence in 1920.

In 1930, the Great Depression begins. Efforts taken by the League of Nations in 1927 prove meaningless in the face of global economic uncertainty. Nationalism begins to rise again after staying quelled during the 1920s. Major economics begin raising tariffs to try and maintain favorable balance of payments and stable fiscal situations.

From 1939 to 1945, World War II produces another catastrophic collapse in international trade. But the cost is not just borne by trade balances; human and physical capital is obliterated in Europe.

From a certain perspective, there is an argument to be made that both World Wars were rooted in globalization. As the world economy became globalized in the late-19th and early-20th centuries, the world’s largest economies found themselves needing to assert military dominance in order to secure economic security. Requiring more resources from outside their national borders to fund economic growth, the world’s major economies, situated in Europe at the time, faced little choice but to engage in conflict when forced confront a zero-sum economic system.

An understanding soon began to emerge that the lack of an effective international framework for cooperation facilitated conflict between major economies; the world needed something with more teeth than the League of Nations if a third World War was going to be avoided.

In the waning days of World War II, when it becomes clear that the tides of fascism will be beaten back from Europe’s shores, policymakers across the world begin to discuss ways to ensure cooperation among the world’s largest economies in order to avoid another cataclysmic conflict. Descending on the Mount Washington Hotel in Bretton Woods, New Hampshire, officials from the United States, Canada, Western Europe, Australia, the Soviet Union, and China agreed to a framework of monetary policy management as well as establish rules for commercial and financial relations – the “Bretton Woods” agreement. Important groundwork was being laid to integrate post-war Germany, Japan, and Italy into the new global economic order.

There were two key pillars that the Bretton Woods system was based on. The first was political: the USSR agreed to allow Western European countries return to American-stylized capitalism after World War II. This pillar was cemented when Stalinists in France and Italy supported pro-capitalist governments in the immediate aftermath of World War II. The second pillar was economic: the global economy would be remade in the United States’ image, which at the time was that of a manufacturing behemoth, accounting for 50% of global manufacturing in 1945.

The Bretton Woods system, agreed upon in July 1944, attempted to resolve the conflict between the nation state and an increasingly globalized economy by instilling a framework of cooperation that reduced the need for the world’s major economies to assert military dominance in order to achieve their desired economic goals. Bretton Woods institutions include the World Bank and the International Monetary Fund, whose initial efforts were to rebuilding the post-World War II global economy and promote international economic cooperation.

The Bretton Woods system enshrined an obligation for each country to adopt a monetary policy that maintained its exchange rates within one percent by linking each country’s currency to gold (i.e. the “gold standard”). The UK’s representative at the conference, famed economist John Maynard Keynes, attempted to ensure that the British empire would remain at the center of this new system, proposing a “bancor” international currency in an attempt to preserve British influence.

Somewhat ironically, the calls for cooperation around an international currency failed, and the US Dollar was thus enshrined as the de facto world reserve currency when the gold standard established that gold would be priced at $35/oz and could be exchanged for US Dollars at any point in time; the greenback was ‘as good as gold.’ 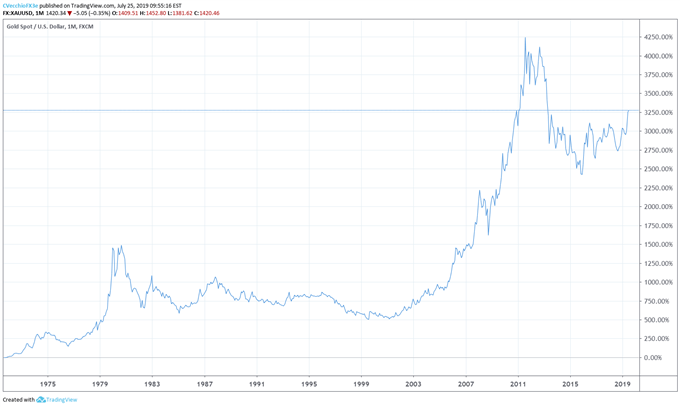 1971: Nixon Takes US Off the Gold Standard

By the late 1960s, the Bretton Woods system was under pressure as the rapidly expanding post-World War II European economy strained relations with the United States. Flush with excess capital (vis-à-vis higher taxes revenues), European governments were recycling their US Dollars back into gold, provoking a massive drawdown in US gold reserves. In a sense, under Bretton Woods, global growth was being financed at the United States’ expense.

On August 15, 1971, US President Richard Nixon announced that the US would no longer honor accept US Dollar conversion to gold, ending US participation in the “gold standard.” In doing so, US President Nixon was attempting to maintain American influence over the global economy. As history shows, the removal of the “gold standard” was terrible for the US Dollar, with the DXY Index losing -23% of its value in the immediate two years following the decision – it hastened the decline of the US Dollar as the centerpiece of the global financial system

Read more: The History of Forex 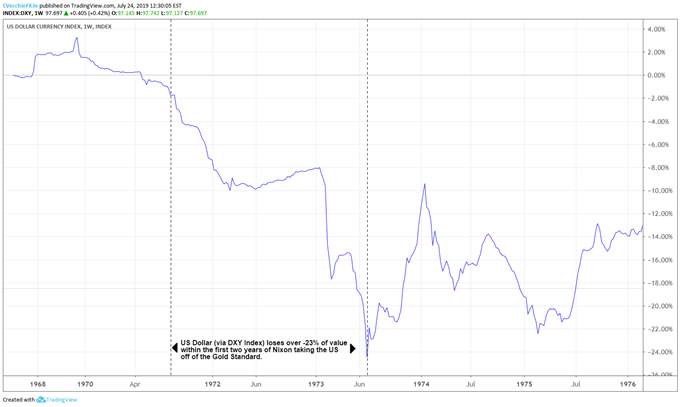 But as other countries adopted American-stylized capitalism in the post-World War II years, the United States lost its perch as the preeminent manufacturing economy of the global economy: after peaking at 50% in 1945, the US share of global manufacturing output is now around 18%.

In 2019, both the Chinese and European shares of global manufacturing output are greater than that of the United States (approximately 20% each). Much of the US-China trade war is predicated around the belief that China has unfairly take advantage of the US-led international trade order. In a sense, the seeds of the US-China trade war were planted when the Bretton Woods system of international cooperation began to erode starting with the US departure from “gold standard” in 1971.

2019: Lessons of Bretton Woods are Forgotten

With the US-China trade war raging, it’s clear that the lessons of the gathering in Bretton Woods, New Hampshire 75 years ago have been forgotten. As US President Donald Trump rages against the United States’ largest trading partners for unfair trade practices, he continually lampoons China and the European Union for competitive currency valuations versus the US Dollar. The use of tariffs by the US as a protectionist measure harkens the demise of the US-led international order.

But for western economies, the collapse of the Bretton Woods system of international cooperation may be a harbinger of things to come. "The Bretton Woods order as we know it has reached its limits," French Finance Minister Bruno Le Maire recently said. "Unless we are able to reinvent Bretton Woods, the New Silk Roads [China’s efforts to fund infrastructure development from Asia to Europe] might become the new world order.” 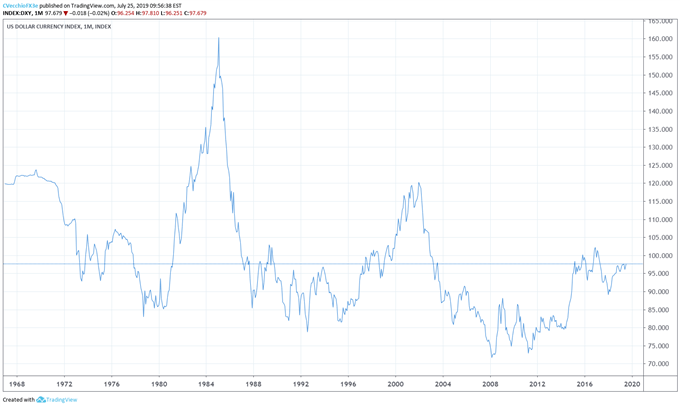 Who Benefits if US Dollar Loses Hegemony?

The Bretton Woods system, much to the chagrin of John Maynard Keynes, enshrined the US Dollar as the world’s reserve currency, taking the mantle from the British Pound – this is why Keynes wanted the “bancor” currency. Having the power of the global unit of account – all oil contracts are settled in US Dollars, hence the “petrodollar,” for example – the US Dollar (and thus, the US economy) is afforded a level of privilege that few others enjoy.

But the underpinning of this privilege has been the fact that the US economy has maintained at least a 25% share of global GDP in the post-World War II era. That countries in Asia and Africa are growing faster than their western counterparts means that there will be an inevitable shift of power over the coming decades. If the Bretton Woods institutions fails to evolve in a manner that allows for greater cooperation among emerging market economies, it’s likely that China’s One Belt, One Road initiative becomes a new standard for global cooperation.

The US-China trade war is yet another episode in the history of the global economy where the old power is struggling to contain a rapidly growing new power. Perhaps the United States will be as helpless in preserving the US Dollar’s role at the center of the global financial system as John Maynard Keynes and the British were in 1944.

But it shouldn't be understated or undersold: the US-China trade war is a threat to US Dollar hegemony; indeed, it is a threat to entire post-World War II order conceived in a quaint New Hampshire town known as Bretton Woods.

What Type of Forex Trader Are You?