Market Cycles: What You Need to Know

A market cycle is the process in which bull markets mature from beginning to end and then reverse into a bear market where excesses from the bull market are corrected. These cycles have been unfolding in comparable fashion since market speculation began. While no two market cycles have ever looked identical or had the exact same underlying drivers, they generally exhibited similar characteristics during each portion of the cycle primarily due to human nature and market psychology.

A majority run their course and fall in the ‘normal’ bull & bear market cycle category while some have morphed into full-blown bubbles or manias which resulted in crashes. The difference between the two is the magnitude at which the underlying asset price climbs and the pitch at which investor sentiment rises. In any event, the following will help provide a guide for those who want to learn about the differing phases of a market cycle to help better navigate them.

A market cycle has five main phases: Discovery, Momentum, Blow-off, Transition, and Deflation. A full market cycle may last only a few years or a couple of decades, depending on whether it is a cyclical (short-term) or secular (long-term) trend. Typically, shorter, cyclical trends also develop within the context of the longer, secular trends. 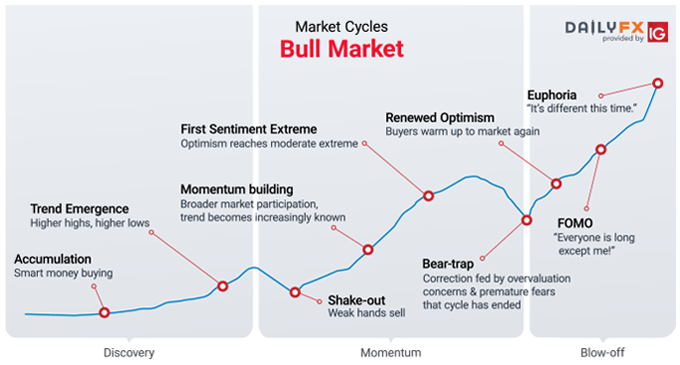 This phase marks the beginning of an emerging bull market trend and goesunnoticed by the majority of market participants. It’s during this period when the last bear market officially ends and the new bull market begins, however; this doesn’t become apparent until later in the cycle.

In this phase the trend draws in an increasingly larger market participation base as awareness spreads. Growing participation and excitement builds, accelerating the trend and creating strong momentum.

This is the most violent phase of the bull market as it speeds ahead with maximum participation with the least informed (every day investors) joining in. Market participants’ behavior becomes increasingly irrational, and in the case of bubbles/manias it becomes highly irrational. Eventually the trend becomes unsustainable and typically in an abrupt fashion. 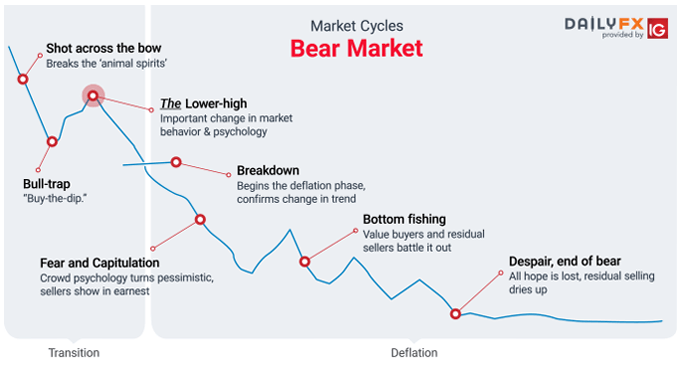 This is where a major turning point takes shape in market psychology, as the cycle shifts from bullish to neutral to bearish. There is still optimism that the market will continue to trader higher, but enough skepticism at this juncture to prevent it from doing such. In short, it’s a push-pull process between buyers and sellers.

This is really nothing more than the market moving into reverse, or a bear market, and typically unfolds quickly, purging excesses built up during the bull market.

Market cycles have been going on forever and will continue to play out in a similar manner long into the future. To see how these cycles played out during some of the most extreme times in market history, check out “A Brief History of Major Financial Bubbles, Crises, and Flash-crashes”.

Having a sound understanding of the various phases which make up a market cycle can provide a blueprint for navigating future cycles. To further help you, we have beginner and advanced tutorials related to market cycles (Elliot Wave Principle) and quarterly trading forecasts; these can be found on the DailyFX Trading Guides page.